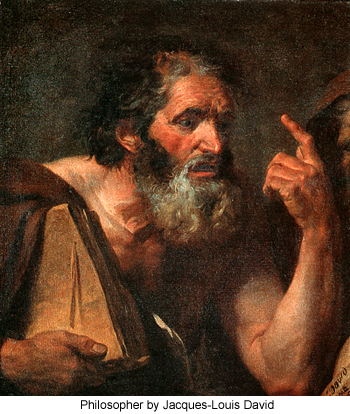 146:3.1 At Ramah Jesus had the memorable discussion with the aged Greek philosopher who taught that science and philosophy were sufficient to satisfy the needs of human experience. Jesus listened with patience and sympathy to this Greek teacher, allowing the truth of many things he said but pointing out that, when he was through, he had failed in his discussion of human existence to explain "whence, why, and whither," and added: "Where you leave off, we begin. Religion is a revelation to man's soul dealing with spiritual realities which the mind alone could never discover or fully fathom. Intellectual strivings may reveal the facts of life, but the gospel of the kingdom unfolds the truths of being. You have discussed the material shadows of truth; will you now listen while I tell you about the eternal and spiritual realities which cast these transient time shadows of the material facts of mortal existence?" For more than an hour Jesus taught this Greek the saving truths of the gospel of the kingdom. The old philosopher was susceptible to the Master's mode of approach, and being sincerely honest of heart, he quickly believed this gospel of salvation.

146:3.2 The apostles were a bit disconcerted by the open manner of Jesus' assent to many of the Greek's propositions, but Jesus afterward privately said to them: "My children, marvel not that I was tolerant of the Greek's philosophy. True and genuine inward certainty does not in the least fear outward analysis, nor does truth resent honest criticism. You should never forget that intolerance is the mask covering up the entertainment of secret doubts as to the trueness of one's belief. No man is at any time disturbed by his neighbor's attitude when he has perfect confidence in the truth of that which he wholeheartedly believes. Courage is the confidence of thoroughgoing honesty about those things which one professes to believe. Sincere men are unafraid of the critical examination of their true convictions and noble ideals."