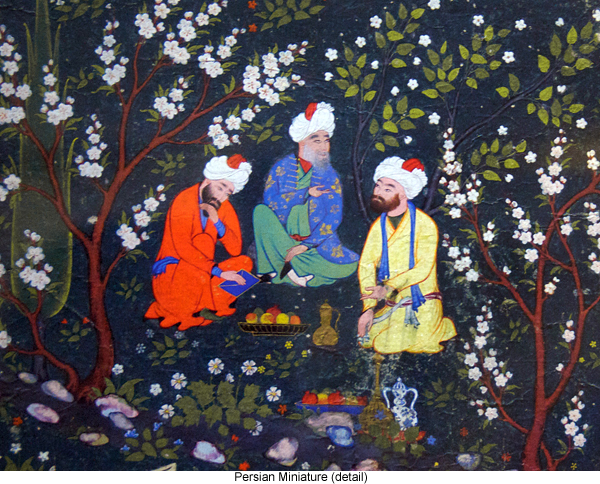 141:6.1 Near the end of the last week at Amathus, Simon Zelotes brought to Jesus one Teherma, a Persian doing business at Damascus. Teherma had heard of Jesus and had come to Capernaum to see him, and there learning that Jesus had gone with his apostles down the Jordan on the way to Jerusalem, he set out to find him. Andrew had presented Teherma to Simon for instruction. Simon looked upon the Persian as a "fire worshiper," although Teherma took great pains to explain that fire was only the visible symbol of the Pure and Holy One. After talking with Jesus, the Persian signified his intention of remaining for several days to hear the teaching and listen to the preaching.

141:6.2 When Simon Zelotes and Jesus were alone, Simon asked the Master: "Why is it that I could not persuade him? Why did he so resist me and so readily lend an ear to you?" Jesus answered: "Simon, Simon, how many times have I instructed you to refrain from all efforts to take something out of the hearts of those who seek salvation? How often have I told you to labor only to put something into these hungry souls? Lead men into the kingdom, and the great and living truths of the kingdom will presently drive out all serious error. When you have presented to mortal man the good news that God is his Father, you can the easier persuade him that he is in reality a son of God. And having done that, you have brought the light of salvation to the one who sits in darkness. Simon, when the Son of Man came first to you, did he come denouncing Moses and the prophets and proclaiming a new and better way of life? I came not to take away that which you had from your forefathers but to show you the perfected vision of that which your fathers saw only in part. Go then, Simon, teaching and preaching the kingdom, and when you have a man safely and securely within the kingdom, then is the time, when such a one shall come to you with inquiries, to impart instruction having to do with the progressive advancement of the soul within the divine kingdom."

141:6.3 Simon was astonished at these words, but he did as Jesus had instructed him, and Teherma, the Persian, was numbered among those who entered the kingdom.