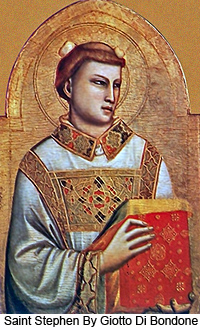 Simon greatly enjoyed his visit to Jerusalem He was duly received into the commonwealth of Israel at the Passover consecration of the new sons of the commandment. While Simon attended the Passover ceremonies, Jesus mingled with the throngs of visitors and engaged in many interesting personal conferences with numerous gentile proselytes.

128:3.5 Perhaps the most notable of all these contacts was the one with a young Hellenist named Stephen. This young man was on his first visit to Jerusalem and chanced to meet Jesus on Thursday afternoon of Passover week. While they both strolled about viewing the Asmonean palace, Jesus began the casual conversation that resulted in their becoming interested in each other, and which led to a four-hour discussion of the way of life and the true God and his worship. Stephen was tremendously impressed with what Jesus said; he never forgot his words.

128:3.6 And this was the same Stephen who subsequently became a believer in the teachings of Jesus, and whose boldness in preaching this early gospel resulted in his being stoned to death by irate Jews. Some of Stephen's extraordinary boldness in proclaiming his view of the new gospel was the direct result of this earlier interview with Jesus. But Stephen never even faintly surmised that the Galilean he had talked with some fifteen years previously was the very same person whom he later proclaimed the world's Savior, and for whom he was so soon to die, thus becoming the first martyr of the newly evolving Christian faith. When Stephen yielded up his life as the price of his attack upon the Jewish temple and its traditional practices, there stood by one named Saul, a citizen of Tarsus. And when Saul saw how this Greek could die for his faith, there were aroused in his heart those emotions which eventually led him to espouse the cause for which Stephen died; later on he became the aggressive and indomitable Paul, the philosopher, if not the sole founder, of the Christian religion.