Preparing For Open Warfare With His Enemies 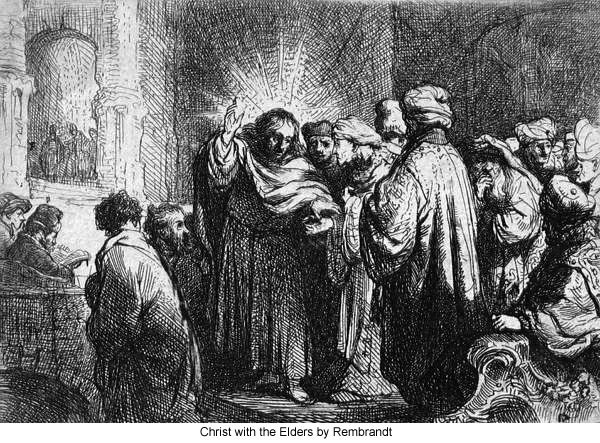 153:1.1 A distinguished congregation greeted Jesus at three o'clock on this exquisite Sabbath afternoon in the new Capernaum synagogue. Jairus presided and handed Jesus the Scriptures to read. The day before, fifty-three Pharisees and Sadducees had arrived from Jerusalem; more than thirty of the leaders and rulers of the neighboring synagogues were also present. These Jewish religious leaders were acting directly under orders from the Sanhedrin at Jerusalem, and they constituted the orthodox vanguard which had come to inaugurate open warfare on Jesus and his disciples. Sitting by the side of these Jewish leaders, in the synagogue seats of honor, were the official observers of Herod Antipas, who had been directed to ascertain the truth concerning the disturbing reports that an attempt had been made by the populace to proclaim Jesus the king of the Jews, over in the domains of his brother Philip.

153:1.2 Jesus comprehended that he faced the immediate declaration of avowed and open warfare by his increasing enemies, and he elected boldly to assume the offensive. At the feeding of the five thousand he had challenged their ideas of the material Messiah; now he chose again openly to attack their concept of the Jewish deliverer. This crisis, which began with the feeding of the five thousand, and which terminated with this Sabbath afternoon sermon, was the outward turning of the tide of popular fame and acclaim. Henceforth, the work of the kingdom was to be increasingly concerned with the more important task of winning lasting spiritual converts for the truly religious brotherhood of mankind. This sermon marks the crisis in the transition from the period of discussion, controversy, and decision to that of open warfare and final acceptance or final rejection.

153:1.5 As they sat there in the synagogue that afternoon before Jesus began to speak, there was just one great mystery, just one supreme question, in the minds of all. Both his friends and his foes pondered just one thought, and that was: "Why did he himself so deliberately and effectively turn back the tide of popular enthusiasm?" And it was immediately before and immediately after this sermon that the doubts and disappointments of his disgruntled adherents grew into unconscious opposition and eventually turned into actual hatred. It was after this sermon in the synagogue that Judas Iscariot entertained his first conscious thought of deserting. But he did, for the time being, effectively master all such inclinations.

153:1.6 Everyone was in a state of perplexity. Jesus had left them dumfounded and confounded. He had recently engaged in the greatest demonstration of supernatural power to characterize his whole career. The feeding of the five thousand was the one event of his earth life which made the greatest appeal to the Jewish concept of the expected Messiah. But this extraordinary advantage was immediately and unexplainedly offset by his prompt and unequivocal refusal to be made king.

153:1.7 On Friday evening, and again on Sabbath morning, the Jerusalem leaders had labored long and earnestly with Jairus to prevent Jesus' speaking in the synagogue, but it was of no avail. Jairus's only reply to all this pleading was: "I have granted this request, and I will not violate my word."