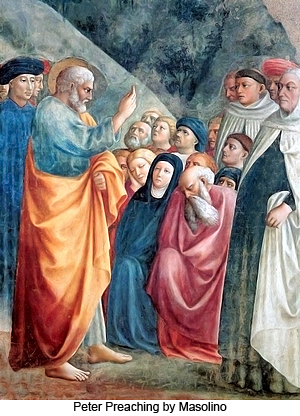 146:1.1 The small city of Rimmon had once been dedicated to the worship of a Babylonian god of the air, Ramman. Many of the earlier Babylonian and later Zoroastrian teachings were still embraced in the beliefs of the Rimmonites; therefore did Jesus and the twenty-four devote much of their time to the task of making plain the difference between these older beliefs and the new gospel of the kingdom. Peter here preached one of the great sermons of his early career on "Aaron and the Golden Calf."

146:1.2 Although many of the citizens of Rimmon became believers in Jesus' teachings, they made great trouble for their brethren in later years. It is difficult to convert nature worshipers to the full fellowship of the adoration of a spiritual ideal during the short space of a single lifetime.

146:1.3 Many of the better of the Babylonian and Persian ideas of light and darkness, good and evil, time and eternity, were later incorporated in the doctrines of so-called Christianity, and their inclusion rendered the Christian teachings more immediately acceptable to the peoples of the Near East. In like manner, the inclusion of many of Plato's theories of the ideal spirit or invisible patterns of all things visible and material, as later adapted by Philo to the Hebrew theology, made Paul's Christian teachings more easy of acceptance by the western Greeks.

146:1.4 It was at Rimmon that Todan first heard the gospel of the kingdom, and he later carried this message into Mesopotamia and far beyond. He was among the first to preach the good news to those who dwelt beyond the Euphrates.