A Picture Of Pontius Pilate 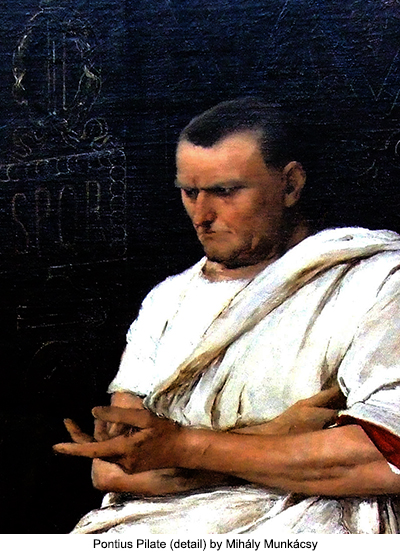 185:1.1 If Pontius Pilate had not been a reasonably good governor of the minor provinces, Tiberius would hardly have suffered him to remain as procurator of Judea for ten years. Although he was a fairly good administrator, he was a moral coward. He was not a big enough man to comprehend the nature of his task as governor of the Jews He failed to grasp the fact that these Hebrews had a real religion, a faith for which they were willing to die, and that millions upon millions of them, scattered here and there throughout the empire, looked to Jerusalem as the shrine of their faith and held the Sanhedrin in respect as the highest tribunal on earth.

185:1.2 Pilate did not love the Jews, and this deep-seated hatred early began to manifest itself. Of all the Roman provinces, none was more difficult to govern than Judea. Pilate never really understood the problems involved in the management of the Jews and, therefore, very early in his experience as governor, made a series of almost fatal and well-nigh suicidal blunders. And it was these blunders that gave the Jews such power over him. When they wanted to influence his decisions, all they had to do was to threaten an uprising, and Pilate would speedily capitulate. And this apparent vacillation, or lack of moral courage, of the procurator was chiefly due to the memory of a number of controversies he had had with the Jews and because in each instance they had worsted him. The Jews knew that Pilate was afraid of them, that he feared for his position before Tiberius, and they employed this knowledge to the great disadvantage of the governor on numerous occasions.

185:1.3 Pilate's disfavor with the Jews came about as a result of a number of unfortunate encounters. First, he failed to take seriously their deep-seated prejudice against all images as symbols of idol worship. Therefore he permitted his soldiers to enter Jerusalem without removing the images of Caesar from their banners, as had been the practice of the Roman soldiers under his predecessor. A large deputation of Jews waited upon Pilate for five days, imploring him to have these images removed from the military standards. He flatly refused to grant their petition and threatened them with instant death. Pilate, himself being a skeptic, did not understand that men of strong religious feelings will not hesitate to die for their religious convictions; and therefore was he dismayed when these Jews drew themselves up defiantly before his palace, bowed their faces to the ground, and sent word that they were ready to die. Pilate then realized that he had made a threat which he was unwilling to carry out. He surrendered, ordered the images removed from the standards of his soldiers in Jerusalem, and found himself from that day on to a large extent subject to the whims of the Jewish leaders, who had in this way discovered his weakness in making threats which he feared to execute.

185:1.4 Pilate subsequently determined to regain this lost prestige and accordingly had the shields of the emperor, such as were commonly used in Caesar worship, put up on the walls of Herod's palace in Jerusalem. When the Jews protested, he was adamant. When he refused to listen to their protests, they promptly appealed to Rome, and the emperor as promptly ordered the offending shields removed. And then was Pilate held in even lower esteem than before.

185:1.5 Another thing which brought him into great disfavor with the Jews was that he dared to take money from the temple treasury to pay for the construction of a new aqueduct to provide increased water supply for the millions of visitors to Jerusalem at the times of the great religious feasts. The Jews held that only the Sanhedrin could disburse the temple funds, and they never ceased to inveigh against Pilate for this presumptuous ruling. No less than a score of riots and much bloodshed resulted from this decision. The last of these serious outbreaks had to do with the slaughter of a large company of Galileans even as they worshiped at the altar.

185:1.6 It is significant that, while this vacillating Roman ruler sacrificed Jesus to his fear of the Jews and to safeguard his personal position, he finally was deposed as a result of the needless slaughter of Samaritans in connection with the pretensions of a false Messiah who led troops to Mount Gerizim, where he claimed the temple vessels were buried; and fierce riots broke out when he failed to reveal the hiding place of the sacred vessels, as he had promised. As a result of this episode, the legatus of Syria ordered Pilate to Rome. Tiberius died while Pilate was on the way to Rome, and he was not reappointed as procurator of Judea. He never fully recovered from the regretful condemnation of having consented to the crucifixion of Jesus. Finding no favor in the eyes of the new emperor, he retired to the province of Lausanne, where he subsequently committed suicide.

185:1.7 Claudia Procula, Pilate's wife, had heard much of Jesus through the word of her maid-in-waiting, who was a Phoenician believer in the gospel of the kingdom. After the death of Pilate, Claudia became prominently identified with the spread of the good news.

185:1.8 And all this explains much that transpired on this tragic Friday forenoon. It is easy to understand why the Jews presumed to dictate to Pilate—to get him up at six o'clock to try Jesus—and also why they did not hesitate to threaten to charge him with treason before the emperor if he dared to refuse their demands for Jesus' death.

185:1.9 A worthy Roman governor who had not become disadvantageously involved with the rulers of the Jews would never have permitted these bloodthirsty religious fanatics to bring about the death of a man whom he himself had declared to be innocent of their false charges and without fault. Rome made a great blunder, a far-reaching error in earthly affairs, when she sent the second-rate Pilate to govern Palestine. Tiberius had better have sent to the Jews the best provincial administrator in the empire.