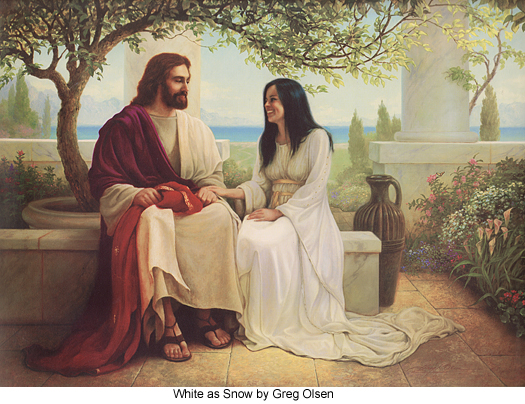 194:3.14 Before the teachings of Jesus which culminated in Pentecost, women had little or no spiritual standing in the tenets of the older religions. After Pentecost, in the brotherhood of the kingdom woman stood before God on an equality with man. Among the one hundred and twenty who received this special visitation of the spirit were many of the women disciples, and they shared these blessings equally with the men believers. No longer can man presume to monopolize the ministry of religious service. The Pharisee might go on thanking God that he was "not born a woman, a leper, or a gentile," but among the followers of Jesus woman has been forever set free from all religious discriminations based on sex. Pentecost obliterated all religious discrimination founded on racial distinction, cultural differences, social caste, or sex prejudice. No wonder these believers in the new religion would cry out, "Where the spirit of the Lord is, there is liberty."

194:3.15 Both the mother and brother of Jesus were present among the one hundred and twenty believers, and as members of this common group of disciples, they also received the outpoured spirit. They received no more of the good gift than did their fellows. No special gift was bestowed upon the members of Jesus' earthly family. Pentecost marked the end of special priesthoods and all belief in sacred families.

194:3.16 Before Pentecost the apostles had given up much for Jesus. They had sacrificed their homes, families, friends, worldly goods, and positions. At Pentecost they gave themselves to God, and the Father and the Son responded by giving themselves to man—sending their spirits to live within men. This experience of losing self and finding the spirit was not one of emotion; it was an act of intelligent self-surrender and unreserved consecration.

194:3.17 Pentecost was the call to spiritual unity among gospel believers. When the spirit descended on the disciples at Jerusalem, the same thing happened in Philadelphia, Alexandria, and at all other places where true believers dwelt. It was literally true that "there was but one heart and soul among the multitude of the believers." The religion of Jesus is the most powerful unifying influence the world has ever known.

194:3.18 Pentecost was designed to lessen the self-assertiveness of individuals, groups, nations, and races. It is this spirit of self-assertiveness which so increases in tension that it periodically breaks loose in destructive wars. Mankind can be unified only by the spiritual approach, and the Spirit of Truth is a world influence which is universal.

194:3.19 The coming of the Spirit of Truth purifies the human heart and leads the recipient to formulate a life purpose single to the will of God and the welfare of men. The material spirit of selfishness has been swallowed up in this new spiritual bestowal of selflessness. Pentecost, then and now, signifies that the Jesus of history has become the divine Son of living experience. The joy of this outpoured spirit, when it is consciously experienced in human life, is a tonic for health, a stimulus for mind, and an unfailing energy for the soul.

194:3.20 Prayer did not bring the spirit on the day of Pentecost, but it did have much to do with determining the capacity of receptivity which characterized the individual believers. Prayer does not move the divine heart to liberality of bestowal, but it does so often dig out larger and deeper channels wherein the divine bestowals may flow to the hearts and souls of those who thus remember to maintain unbroken communion with their Maker through sincere prayer and true worship.