Home Jesus Illustrated Stories Pentecost: The Bestowal Of The Spirit Of Truth

Pentecost: The Bestowal Of The Spirit Of Truth 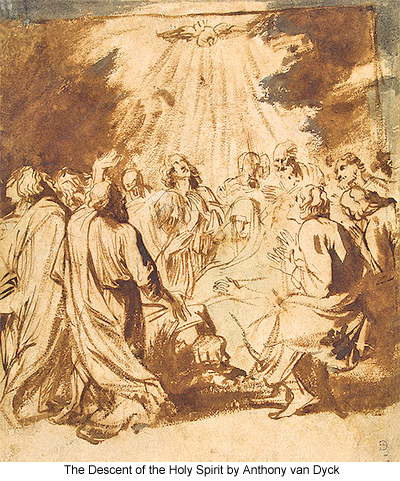 ABOUT ONE O'CLOCK, as the one hundred and twenty believers were engaged in prayer, they all became aware of a strange presence in the room. At the same time these disciples all became conscious of a new and profound sense of spiritual joy, security, and confidence. This new consciousness of spiritual strength was immediately followed by a strong urge to go out and publicly proclaim the gospel of the kingdom and the good news that Jesus had risen from the dead.

194:0.2 Peter stood up and declared that this must be the coming of the Spirit of Truth which the Master had promised them and proposed that they go to the temple and begin the proclamation of the good news committed to their hands. And they did just what Peter suggested.

194:0.3 These men had been trained and instructed that the gospel which they should preach was the fatherhood of God and the sonship of man, but at just this moment of spiritual ecstasy and personal triumph, the best tidings, the greatest news, these men could think of was the fact of the risen Master. And so they went forth, endowed with power from on high, preaching glad tidings to the people—even salvation through Jesus—but they unintentionally stumbled into the error of substituting some of the facts associated with the gospel for the gospel message itself. Peter unwittingly led off in this mistake, and others followed after him on down to Paul, who created a new religion out of the new version of the good news.

194:0.4 The gospel of the kingdom is: the fact of the fatherhood of God, coupled with the resultant truth of the sonship-brotherhood of men. Christianity, as it developed from that day, is: the fact of God as the Father of the Lord Jesus Christ, in association with the experience of believer-fellowship with the risen and glorified Christ.

194:0.5 It is not strange that these spirit-infused men should have seized upon this opportunity to express their feelings of triumph over the forces which had sought to destroy their Master and end the influence of his teachings. At such a time as this it was easier to remember their personal association with Jesus and to be thrilled with the assurance that the Master still lived, that their friendship had not ended, and that the spirit had indeed come upon them even as he had promised.

194:0.6 These believers felt themselves suddenly translated into another world, a new existence of joy, power, and glory. The Master had told them the kingdom would come with power, and some of them thought they were beginning to discern what he meant.

194:0.7 And when all of this is taken into consideration, it is not difficult to understand how these men came to preach a new gospel about Jesus in the place of their former message of the fatherhood of God and the brotherhood of men.