Meeting With The Greek Philosopher 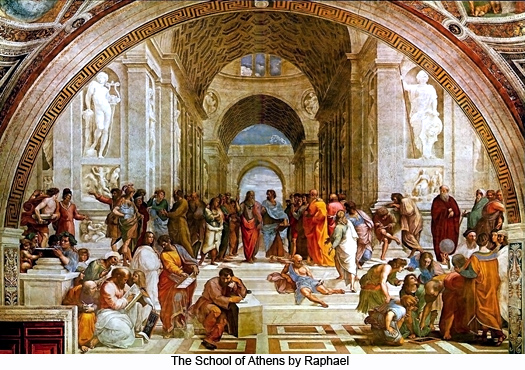 133:5.1 They shortly arrived at the olden center of Greek science and learning, and Ganid was thrilled with the thought of being in Athens, of being in Greece, the cultural center of the onetime Alexandrian empire, which had extended its borders even to his own land of India. There was little business to transact; so Gonod spent most of his time with Jesus and Ganid, visiting the many points of interest and listening to the interesting discussions of the lad and his versatile teacher.

133:5.2 A great university still thrived in Athens, and the trio made frequent visits to its halls of learning. Jesus and Ganid had thoroughly discussed the teachings of Plato when they attended the lectures in the museum at Alexandria. They all enjoyed the art of Greece, examples of which were still to be found here and there about the city.

133:5.3 Both the father and the son greatly enjoyed the discussion on science which Jesus had at their inn one evening with a Greek philosopher. After this pedant had talked for almost three hours, and when he had finished his discourse, Jesus, in terms of modern thought, said:

133:5.4 Scientists may some day measure the energy, or force manifestations, of gravitation, light, and electricity, but these same scientists can never (scientifically) tell you what these universe phenomena are. Science deals with physical-energy activities; religion deals with eternal values. True philosophy grows out of the wisdom which does its best to correlate these quantitative and qualitative observations. There always exists the danger that the purely physical scientist may become afflicted with mathematical pride and statistical egotism, not to mention spiritual blindness.

133:5.5 Logic is valid in the material world, and mathematics is reliable when limited in its application to physical things; but neither is to be regarded as wholly dependable or infallible when applied to life problems. Life embraces phenomena which are not wholly material. Arithmetic says that, if one man could shear a sheep in ten minutes, ten men could shear it in one minute. That is sound mathematics, but it is not true, for the ten men could not so do it; they would get in one another's way so badly that the work would be greatly delayed.

133:5.6 Mathematics asserts that, if one person stands for a certain unit of intellectual and moral value, ten persons would stand for ten times this value. But in dealing with human personality it would be nearer the truth to say that such a personality association is a sum equal to the square of the number of personalities concerned in the equation rather than the simple arithmetical sum. A social group of human beings in co-ordinated working harmony stands for a force far greater than the simple sum of its parts.

133:5.7 Quantity may be identified as a fact, thus becoming a scientific uniformity. Quality, being a matter of mind interpretation, represents an estimate of values, and must, therefore, remain an experience of the individual. When both science and religion become less dogmatic and more tolerant of criticism, philosophy will then begin to achieve unity in the intelligent comprehension of the universe.

133:5.8 There is unity in the cosmic universe if you could only discern its workings in actuality. The real universe is friendly to every child of the eternal God. The real problem is: How can the finite mind of man achieve a logical, true, and corresponding unity of thought? This universe-knowing state of mind can be had only by conceiving that the quantitative fact and the qualitative value have a common causation in the Paradise Father. Such a conception of reality yields a broader insight into the purposeful unity of universe phenomena; it even reveals a spiritual goal of progressive personality achievement. And this is a concept of unity which can sense the unchanging background of a living universe of continually changing impersonal relations and evolving personal relationships.

133:5.9 Matter and spirit and the state intervening between them are three interrelated and interassociated levels of the true unity of the real universe. Regardless of how divergent the universe phenomena of fact and value may appear to be, they are, after all, unified in the Supreme.

133:5.10 Reality of material existence attaches to unrecognized energy as well as to visible matter. When the energies of the universe are so slowed down that they acquire the requisite degree of motion, then, under favorable conditions, these same energies become mass. And forget not, the mind which can alone perceive the presence of apparent realities is itself also real. And the fundamental cause of this universe of energy-mass, mind, and spirit, is eternal-it exists and consists in the nature and reactions of the Universal Father and his absolute co-ordinates.