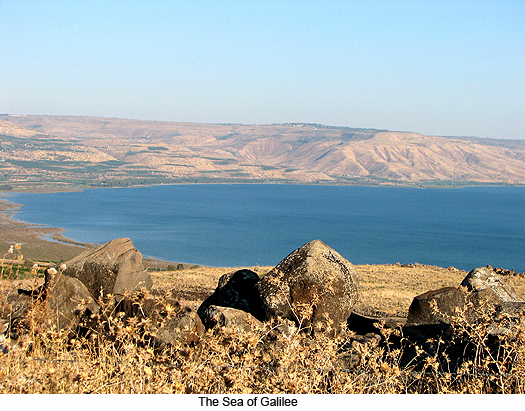 123:6.1 This was an interesting year at school. Although Jesus was not an unusual student, he was a diligent pupil and belonged to the more progressive third of the class, doing his work so well that he was excused from attendance one week out of each month. This week he usually spent either with his fisherman uncle on the shores of the Sea of Galilee near Magdala or on the farm of another uncle (his mother's brother) five miles south of Nazareth.

123:6.2 Although his mother had become unduly anxious about his health and safety, she gradually became reconciled to these trips away from home. Jesus' uncles and aunts were all very fond of him, and there ensued a lively competition among them to secure his company for these monthly visits throughout this and immediately subsequent years. His first week's sojourn on his uncle's farm (since infancy) was in January of this year; the first week's fishing experience on the Sea of Galilee occurred in the month of May.

123:6.3 About this time Jesus met a teacher of mathematics from Damascus, and learning some new techniques of numbers, he spent much time on mathematics for several years. He developed a keen sense of numbers, distances, and proportions.

123:6.4 Jesus began to enjoy his brother James very much and by the end of this year had begun to teach him the alphabet.

123:6.5 This year Jesus made arrangements to exchange dairy products for lessons on the harp. He had an unusual liking for everything musical. Later on he did much to promote an interest in vocal music among his youthful associates. By the time he was eleven years of age, he was a skillful harpist and greatly enjoyed entertaining both family and friends with his extraordinary interpretations and able improvisations.

123:6.6 While Jesus continued to make enviable progress at school, all did not run smoothly for either parents or teachers. He persisted in asking many embarrassing questions concerning both science and religion, particularly regarding geography and astronomy. He was especially insistent on finding out why there was a dry season and a rainy season in Palestine. Repeatedly he sought the explanation for the great difference between the temperatures of Nazareth and the Jordan valley. He simply never ceased to ask such intelligent but perplexing questions.