Matadormus, The Rich Young Man, And Others 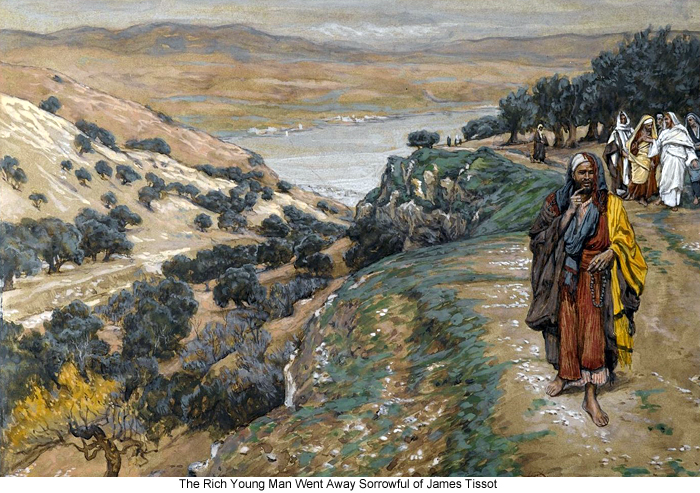 163:2.1 Over fifty disciples who sought ordination and appointment to membership in the seventy were rejected by the committee appointed by Jesus to select these candidates. This committee consisted of Andrew, Abner, and the acting head of the evangelistic corps. In all cases where this committee of three were not unanimous in agreement, they brought the candidate to Jesus, and while the Master never rejected a single person who craved ordination as a gospel messenger, there were more than a dozen who, when they had talked with Jesus, no more desired to become gospel messengers.

163:2.2 One earnest disciple came to Jesus, saying: "Master, I would be one of your new apostles, but my father is very old and near death; could I be permitted to return home to bury him?" To this man Jesus said: "My son, the foxes have holes, and the birds of heaven have nests, but the Son of Man has nowhere to lay his head. You are a faithful disciple, and you can remain such while you return home to minister to your loved ones, but not so with my gospel messengers. They have forsaken all to follow me and proclaim the kingdom. If you would be an ordained teacher, you must let others bury the dead while you go forth to publish the good news." And this man went away in great disappointment.

163:2.3 Another disciple came to the Master and said: "I would become an ordained messenger, but I would like to go to my home for a short while to comfort my family." And Jesus replied: "If you would be ordained, you must be willing to forsake all. The gospel messengers cannot have divided affections. No man, having put his hand to the plough, if he turns back, is worthy to become a messenger of the kingdom."

163:2.4 Then Andrew brought to Jesus a certain rich young man who was a devout believer, and who desired to receive ordination. This young man, Matadormus, was a member of the Jerusalem Sanhedrin; he had heard Jesus teach and had been subsequently instructed in the gospel of the kingdom by Peter and the other apostles. Jesus talked with Matadormus concerning the requirements of ordination and requested that he defer decision until after he had thought more fully about the matter. Early the next morning, as Jesus was going for a walk, this young man accosted him and said: "Master, I would know from you the assurances of eternal life. Seeing that I have observed all the commandments from my youth, I would like to know what more I must do to gain eternal life?" In answer to this question Jesus said: "If you keep all the commandments-do not commit adultery, do not kill, do not steal, do not bear false witness, do not defraud, honor your parents-you do well, but salvation is the reward of faith, not merely of works. Do you believe this gospel of the kingdom?" And Matadormus answered: "Yes, Master, I do believe everything you and your apostles have taught me." And Jesus said, "Then are you indeed my disciple and a child of the kingdom."

163:2.5 Then said the young man: "But, Master, I am not content to be your disciple; I would be one of your new messengers." When Jesus heard this, he looked down upon him with a great love and said: "I will have you to be one of my messengers if you are willing to pay the price, if you will supply the one thing which you lack." Matadormus replied: "Master, I will do anything if I may be allowed to follow you." Jesus, kissing the kneeling young man on the forehead, said: "If you would be my messenger, go and sell all that you have and, when you have bestowed the proceeds upon the poor or upon your brethren, come and follow me, and you shall have treasure in the kingdom of heaven."

163:2.6 When Matadormus heard this, his countenance fell. He arose and went away sorrowful, for he had great possessions. This wealthy young Pharisee had been raised to believe that wealth was the token of God's favor. Jesus knew that he was not free from the love of himself and his riches. The Master wanted to deliver him from the love of wealth, not necessarily from the wealth. While the disciples of Jesus did not part with all their worldly goods, the apostles and the seventy did. Matadormus desired to be one of the seventy new messengers, and that was the reason for Jesus' requiring him to part with all of his temporal possessions.

163:2.7 Almost every human being has some one thing which is held on to as a pet evil, and which the entrance into the kingdom of heaven requires as a part of the price of admission. If Matadormus had parted with his wealth, it probably would have been put right back into his hands for administration as treasurer of the seventy. For later on, after the establishment of the church at Jerusalem, he did obey the Master's injunction, although it was then too late to enjoy membership in the seventy, and he became the treasurer of the Jerusalem church, of which James the Lord's brother in the flesh was the head.

163:2.8 Thus always it was and forever will be: Men must arrive at their own decisions. There is a certain range of the freedom of choice which mortals may exercise. The forces of the spiritual world will not coerce man; they allow him to go the way of his own choosing.

163:2.9 Jesus foresaw that Matadormus, with his riches, could not possibly become an ordained associate of men who had forsaken all for the gospel; at the same time, he saw that, without his riches, he would become the ultimate leader of all of them. But, like Jesus' own brethren, he never became great in the kingdom because he deprived himself of that intimate and personal association with the Master which might have been his experience had he been willing to do at this time the very thing which Jesus asked, and which, several years subsequently, he actually did.

163:2.10 Riches have nothing directly to do with entrance into the kingdom of heaven, but the love of wealth does. The spiritual loyalties of the kingdom are incompatible with servility to materialistic mammon. Man may not share his supreme loyalty to a spiritual ideal with a material devotion.

163:2.11 Jesus never taught that it was wrong to have wealth. He required only the twelve and the seventy to dedicate all of their worldly possessions to the common cause. Even then, he provided for the profitable liquidation of their property, as in the case of the Apostle Matthew. Jesus many times advised his well-to-do disciples as he taught the rich man of Rome. The Master regarded the wise investment of excess earnings as a legitimate form of insurance against future and unavoidable adversity. When the apostolic treasury was overflowing, Judas put funds on deposit to be used subsequently when they might suffer greatly from a diminution of income. This Judas did after consultation with Andrew. Jesus never personally had anything to do with the apostolic finances except in the disbursement of alms. But there was one economic abuse which he many times condemned, and that was the unfair exploitation of the weak, unlearned, and less fortunate of men by their strong, keen, and more intelligent fellows. Jesus declared that such inhuman treatment of men, women, and children was incompatible with the ideals of the brotherhood of the kingdom of heaven.