Many Of Herod's Family Believe 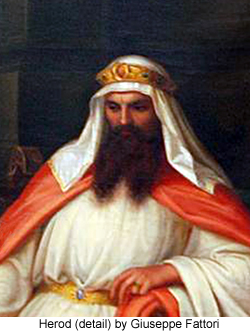 JESUS and the apostles arrived in Capernaum on Wednesday, March 17, and spent two weeks at the Bethsaida headquarters before they departed for Jerusalem. These two weeks the apostles taught the people by the seaside while Jesus spent much time alone in the hills about his Father's business. During this period Jesus, accompanied by James and John Zebedee, made two secret trips to Tiberias, where they met with the believers and instructed them in the gospel of the kingdom.

147:0.2 Many of the household of Herod believed in Jesus and attended these meetings. It was the influence of these believers among Herod's official family that had helped to lessen that ruler's enmity toward Jesus. These believers at Tiberias had fully explained to Herod that the "kingdom" which Jesus proclaimed was spiritual in nature and not a political venture. Herod rather believed these members of his own household and therefore did not permit himself to become unduly alarmed by the spreading abroad of the reports concerning Jesus' teaching and healing. He had no objections to Jesus' work as a healer or religious teacher. Notwithstanding the favorable attitude of many of Herod's advisers, and even of Herod himself, there existed a group of his subordinates who were so influenced by the religious leaders at Jerusalem that they remained bitter and threatening enemies of Jesus and the apostles and, later on, did much to hamper their public activities. The greatest danger to Jesus lay in the Jerusalem religious leaders and not in Herod. And it was for this very reason that Jesus and the apostles spent so much time and did most of their public preaching in Galilee rather than at Jerusalem and in Judea.