Judas In The City 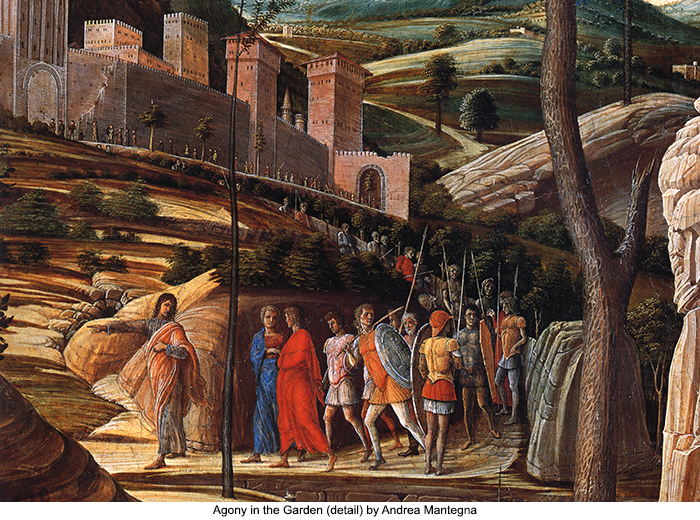 183:2.1 After Judas so abruptly left the table while eating the Last Supper, he went directly to the home of his cousin, and then did the two go straight to the captain of the temple guards. Judas requested the captain to assemble the guards and informed him that he was ready to lead them to Jesus. Judas having appeared on the scene a little before he was expected, there was some delay in getting started for the Mark home, where Judas expected to find Jesus still visiting with the apostles. The Master and the eleven left the home of Elijah Mark fully fifteen minutes before the betrayer and the guards arrived. By the time the apprehenders reached the Mark home, Jesus and the eleven were well outside the walls of the city and on their way to the Olivet camp.

183:2.2 Judas was much perturbed by this failure to find Jesus at the Mark residence and in the company of eleven men, only two of whom were armed for resistance. He happened to know that, in the afternoon when they had left camp, only Simon Peter and Simon Zelotes were girded with swords; Judas had hoped to take Jesus when the city was quiet, and when there was little chance of resistance. The betrayer feared that, if he waited for them to return to their camp, more than threescore of devoted disciples would be encountered, and he also knew that Simon Zelotes had an ample store of arms in his possession. Judas was becoming increasingly nervous as he meditated how the eleven loyal apostles would detest him, and he feared they would all seek to destroy him. He was not only disloyal, but he was a real coward at heart.

183:2.3 When they failed to find Jesus in the upper chamber, Judas asked the captain of the guard to return to the temple. By this time the rulers had begun to assemble at the high priest's home preparatory to receiving Jesus, seeing that their bargain with the traitor called for Jesus' arrest by midnight of that day. Judas explained to his associates that they had missed Jesus at the Mark home, and that it would be necessary to go to Gethsemane to arrest him. The betrayer then went on to state that more than threescore devoted followers were encamped with him, and that they were all well armed. The rulers of the Jews reminded Judas that Jesus had always preached nonresistance, but Judas replied that they could not depend upon all Jesus' followers obeying such teaching. He really feared for himself and therefore made bold to ask for a company of forty armed soldiers. Since the Jewish authorities had no such force of armed men under their jurisdiction, they went at once to the fortress of Antonia and requested the Roman commander to give them this guard; but when he learned that they intended to arrest Jesus, he promptly refused to accede to their request and referred them to his superior officer. In this way more than an hour was consumed in going from one authority to another until they finally were compelled to go to Pilate himself in order to obtain permission to employ the armed Roman guards. It was late when they arrived at Pilate's house, and he had retired to his private chambers with his wife. He hesitated to have anything to do with the enterprise, all the more so since his wife had asked him not to grant the request. But inasmuch as the presiding officer of the Jewish Sanhedrin was present and making personal request for this assistance, the governor thought it wise to grant the petition, thinking he could later on right any wrong they might be disposed to commit.

183:2.4 Accordingly, when Judas Iscariot started out from the temple, about half after eleven o'clock, he was accompanied by more than sixty persons—temple guards, Roman soldiers, and curious servants of the chief priests and rulers.