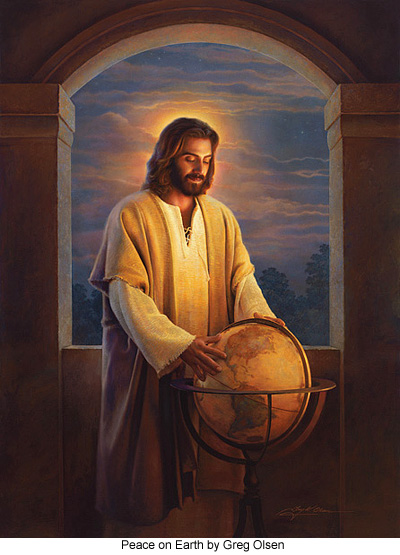 191:4.1 The tenth morontia manifestation of Jesus to mortal recognition occurred a short time after eight o'clock on Tuesday, April 11, at Philadelphia, where he showed himself to Abner and Lazarus and some one hundred and fifty of their associates, including more than fifty of the evangelistic corps of the seventy. This appearance occurred just after the opening of a special meeting in the synagogue which had been called by Abner to discuss the crucifixion of Jesus and the more recent report of the resurrection which had been brought by David's messenger. Inasmuch as the resurrected Lazarus was now a member of this group of believers, it was not difficult for them to believe the report that Jesus had risen from the dead.

191:4.2 The meeting in the synagogue was just being opened by Abner and Lazarus, who were standing together in the pulpit, when the entire audience of believers saw the form of the Master appear suddenly. He stepped forward from where he had appeared between Abner and Lazarus, neither of whom had observed him, and saluting the company, said:

191:4.3 " Peace be upon you. You all know that we have one Father in heaven, and that there is but one gospel of the kingdom—the good news of the gift of eternal life which men receive by faith. As you rejoice in your loyalty to the gospel, pray the Father of truth to shed abroad in your hearts a new and greater love for your brethren. You are to love all men as I have loved you; you are to serve all men as I have served you. With understanding sympathy and brotherly affection, fellowship all your brethren who are dedicated to the proclamation of the good news, whether they be Jew or gentile, Greek or Roman, Persian, or Ethiopian. John proclaimed the kingdom in advance; you have preached the gospel in power; the Greeks already teach the good news; and I am soon to send forth the Spirit of Truth into the souls of all these, my brethren, who have so unselfishly dedicated their lives to the enlightenment of their fellows who sit in spiritual darkness. You are all the children of light; therefore stumble not into the misunderstanding entanglements of mortal suspicion and human intolerance. If you are ennobled, by the grace of faith, to love unbelievers, should you not also equally love those who are your fellow believers in the far-spreading household of faith? Remember, as you love one another, all men will know that you are my disciples.

191:4.4 "Go, then, into all the world proclaiming this gospel of the fatherhood of God and the brotherhood of men to all nations and races and ever be wise in your choice of methods for presenting the good news to the different races and tribes of mankind. Freely you have received this gospel of the kingdom, and you will freely give the good news to all nations. Fear not the resistance of evil, for I am with you always, even to the end of the ages. And my peace I leave with you."

191:4.5 When he had said, "My peace I leave with you," he vanished from their sight. With the exception of one of his appearances in Galilee, where upward of five hundred believers saw him at one time, this group in Philadelphia embraced the largest number of mortals who saw him on any single occasion.

191:4.6 Early the next morning, even while the apostles tarried in Jerusalem awaiting the emotional recovery of Thomas, these believers at Philadelphia went forth proclaiming that Jesus of Nazareth had risen from the dead.

191:4.7 The next day, Wednesday, Jesus spent without interruption in the society of his morontia associates, and during the midafternoon hours he received visiting morontia delegates from the mansion worlds of every local system of inhabited spheres throughout the constellation of Norlatiadek. And they all rejoiced to know their Creator as one of their own order of universe intelligence.