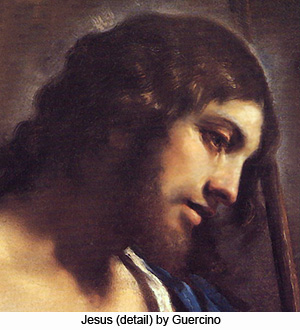 127:2.1 At about this time there was considerable agitation, especially at Jerusalem and in Judea, in favor of rebellion against the payment of taxes to Rome. There was coming into existence a strong nationalist party, presently to be called the Zealots. The Zealots, unlike the Pharisees, were not willing to await the coming of the Messiah. They proposed to bring things to a head through political revolt.

127:2.2 A group of organizers from Jerusalem arrived in Galilee and were making good headway until they reached Nazareth. When they came to see Jesus, he listened carefully to them and asked many questions but refused to join the party. He declined fully to disclose his reasons for not enlisting, and his refusal had the effect of keeping out many of his youthful fellows in Nazareth.

127:2.3 Mary did her best to induce him to enlist, but she could not budge him. She went so far as to intimate that his refusal to espouse the nationalist cause at her behest was insubordination, a violation of his pledge made upon their return from Jerusalem that he would be subject to his parents; but in answer to this insinuation he only laid a kindly hand on her shoulder and, looking into her face, said: "My mother, how could you?"And Mary withdrew her statement.

127:2.4 One of Jesus' uncles (Mary's brother Simon) had already joined this group, subsequently becoming an officer in the Galilean division. And for several years there was something of an estrangement between Jesus and his uncle.

127:2.5 But trouble began to brew in Nazareth. Jesus' attitude in these matters had resulted in creating a division among the Jewish youths of the city. About half had joined the nationalist organization, and the other half began the formation of an opposing group of more moderate patriots, expecting Jesus to assume the leadership. They were amazed when he refused the honor offered him, pleading as an excuse his heavy family responsibilities, which they all allowed. But the situation was still further complicated when, presently, a wealthy Jew, Isaac, a moneylender to the gentiles, came forward agreeing to support Jesus' family if he would lay down his tools and assume leadership of these Nazareth patriots.

127:2.6 Jesus, then scarcely seventeen years of age, was confronted with one of the most delicate and difficult situations of his early life. Patriotic issues, especially when complicated by tax-gathering foreign oppressors, are always difficult for spiritual leaders to relate themselves to, and it was doubly so in this case since the Jewish religion was involved in all this agitation against Rome.

127:2.7 Jesus' position was made more difficult because his mother and uncle, and even his younger brother James, all urged him to join the nationalist cause. All the better Jews of Nazareth had enlisted, and those young men who had not joined the movement would all enlist the moment Jesus changed his mind. He had but one wise counselor in all Nazareth, his old teacher, the chazan, who counseled him about his reply to the citizens' committee of Nazareth when they came to ask for his answer to the public appeal which had been made. In all Jesus' young life this was the very first time he had consciously resorted to public strategy. Theretofore, always had he depended upon a frank statement of truth to clarify the situation, but now he could not declare the full truth. He could not intimate that he was more than a man; he could not disclose his idea of the mission which awaited his attainment of a riper manhood. Despite these limitations his religious fealty and national loyalty were directly challenged. His family was in a turmoil, his youthful friends in division, and the entire Jewish contingent of the town in a hubbub. And to think that he was to blame for it all! And how innocent he had been of all intention to make trouble of any kind, much less a disturbance of this sort.

127:2.8 Something had to be done. He must state his position, and this he did bravely and diplomatically to the satisfaction of many, but not all. He adhered to the terms of his original plea, maintaining that his first duty was to his family, that a widowed mother and eight brothers and sisters needed something more than mere money could buy—the physical necessities of life—that they were entitled to a father's watchcare and guidance, and that he could not in clear conscience release himself from the obligation which a cruel accident had thrust upon him. He paid compliment to his mother and eldest brother for being willing to release him but reiterated that loyalty to a dead father forbade his leaving the family no matter how much money was forthcoming for their material support, making his never-to-be-forgotten statement that "money cannot love." In the course of this address Jesus made several veiled references to his "life mission" but explained that, regardless of whether or not it might be inconsistent with the military idea, it, along with everything else in his life, had been given up in order that he might be able to discharge faithfully his obligation to his family. Everyone in Nazareth well knew he was a good father to his family, and this was a matter so near the heart of every noble Jew that Jesus' plea found an appreciative response in the hearts of many of his hearers; and some of those who were not thus minded were disarmed by a speech made by James, which, while not on the program, was delivered at this time. That very day the chazan had rehearsed James in his speech, but that was their secret.

127:2.9 James stated that he was sure Jesus would help to liberate his people if he (James) were only old enough to assume responsibility for the family, and that, if they would only consent to allow Jesus to remain "with us, to be our father and teacher, then you will have not just one leader from Joseph's family, but presently you will have five loyal nationalists, for are there not five of us boys to grow up and come forth from our brother-father's guidance to serve our nation?" And thus did the lad bring to a fairly happy ending a very tense and threatening situation.

127:2.10 The crisis for the time being was over, but never was this incident forgotten in Nazareth. The agitation persisted; not again was Jesus in universal favor; the division of sentiment was never fully overcome. And this, augmented by other and subsequent occurrences, was one of the chief reasons why he moved to Capernaum in later years. Henceforth Nazareth maintained a division of sentiment regarding the Son of Man.