The Second Discourse On Religion 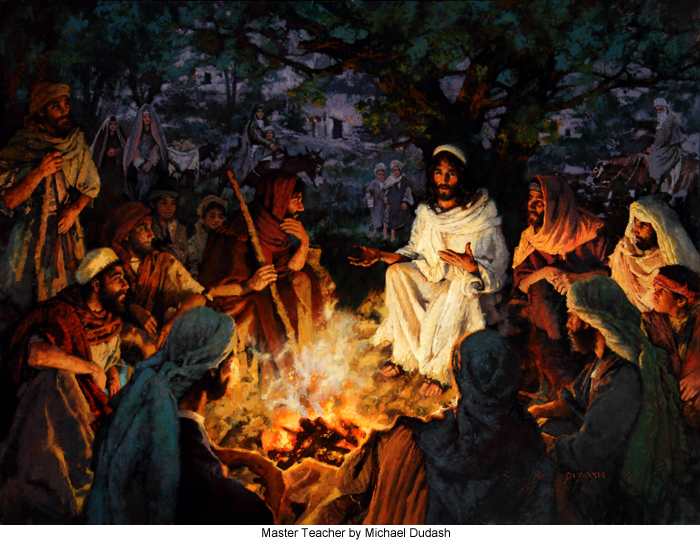 155:6.1 And so, while they paused in the shade of the hillside, Jesus continued to teach them regarding the religion of the spirit, in substance saying:

155:6.2 You have come out from among those of your fellows who choose to remain satisfied with a religion of mind, who crave security and prefer conformity. You have elected to exchange your feelings of authoritative certainty for the assurances of the spirit of adventurous and progressive faith. You have dared to protest against the grueling bondage of institutional religion and to reject the authority of the traditions of record which are now regarded as the word of God. Our Father did indeed speak through Moses, Elijah, Isaiah, Amos, and Hosea, but he did not cease to minister words of truth to the world when these prophets of old made an end of their utterances. My Father is no respecter of races or generations in that the word of truth is vouchsafed one age and withheld from another. Commit not the folly of calling that divine which is wholly human, and fail not to discern the words of truth which come not through the traditional oracles of supposed inspiration.

155:6.3 I have called upon you to be born again, to be born of the spirit. I have called you out of the darkness of authority and the lethargy of tradition into the transcendent light of the realization of the possibility of making for yourselves the greatest discovery possible for the human soul to make—the supernal experience of finding God for yourself, in yourself, and of yourself, and of doing all this as a fact in your own personal experience. And so may you pass from death to life, from the authority of tradition to the experience of knowing God; thus will you pass from darkness to light, from a racial faith inherited to a personal faith achieved by actual experience; and thereby will you progress from a theology of mind handed down by your ancestors to a true religion of spirit which shall be built up in your souls as an eternal endowment.

155:6.4 Your religion shall change from the mere intellectual belief in traditional authority to the actual experience of that living faith which is able to grasp the reality of God and all that relates to the divine spirit of the Father. The religion of the mind ties you hopelessly to the past; the religion of the spirit consists in progressive revelation and ever beckons you on toward higher and holier achievements in spiritual ideals and eternal realities.

155:6.5 While the religion of authority may impart a present feeling of settled security, you pay for such a transient satisfaction the price of the loss of your spiritual freedom and religious liberty. My Father does not require of you as the price of entering the kingdom of heaven that you should force yourself to subscribe to a belief in things which are spiritually repugnant, unholy, and untruthful. It is not required of you that your own sense of mercy, justice, and truth should be outraged by submission to an outworn system of religious forms and ceremonies. The religion of the spirit leaves you forever free to follow the truth wherever the leadings of the spirit may take you. And who can judge —perhaps this spirit may have something to impart to this generation which other generations have refused to hear?

155:6.6 Shame on those false religious teachers who would drag hungry souls back into the dim and distant past and there leave them! And so are these unfortunate persons doomed to become frightened by every new discovery, while they are discomfited by every new revelation of truth. The prophet who said, "He will be kept in perfect peace whose mind is stayed on God," was not a mere intellectual believer in authoritative theology. This truth-knowing human had discovered God; he was not merely talking about God.

155:6.7 I admonish you to give up the practice of always quoting the prophets of old and praising the heroes of Israel, and instead aspire to become living prophets of the Most High and spiritual heroes of the coming kingdom. To honor the God-knowing leaders of the past may indeed be worth while, but why, in so doing, should you sacrifice the supreme experience of human existence: finding God for yourselves and knowing him in your own souls ?

155:6.8 Every race of mankind has its own mental outlook upon human existence; therefore must the religion of the mind ever run true to these various racial viewpoints. Never can the religions of authority come to unification. Human unity and mortal brotherhood can be achieved only by and through the superendowment of the religion of the spirit. Racial minds may differ, but all mankind is indwelt by the same divine and eternal spirit. The hope of human brotherhood can only be realized when, and as, the divergent mind religions of authority become impregnated with, and overshadowed by, the unifying and ennobling religion of the spirit—the religion of personal spiritual experience.

155:6.10 But watch, lest any of you look with disdain upon the children of Abraham because they have fallen on these evil days of traditional barrenness. Our forefathers gave themselves up to the persistent and passionate search for God, and they found him as no other whole race of men have ever known him since the times of Adam, who knew much of this as he was himself a Son of God. My Father has not failed to mark the long and untiring struggle of Israel, ever since the days of Moses, to find God and to know God. For weary generations the Jews have not ceased to toil, sweat, groan, travail, and endure the sufferings and experience the sorrows of a misunderstood and despised people, all in order that they might come a little nearer the discovery of the truth about God. And, notwithstanding all the failures and falterings of Israel, our fathers progressively, from Moses to the times of Amos and Hosea, did reveal increasingly to the whole world an ever clearer and more truthful picture of the eternal God. And so was the way prepared for the still greater revelation of the Father which you have been called to share.

155:6.11 Never forget there is only one adventure which is more satisfying and thrilling than the attempt to discover the will of the living God, and that is the supreme experience of honestly trying to do that divine will. And fail not to remember that the will of God can be done in any earthly occupation. Some callings are not holy and others secular. All things are sacred in the lives of those who are spirit led; that is, subordinated to truth, ennobled by love, dominated by mercy, and restrained by fairness — justice. The spirit which my Father and I shall send into the world is not only the Spirit of Truth but also the spirit of idealistic beauty.

155:6.12 You must cease to seek for the word of God only on the pages of the olden records of theologic authority. Those who are born of the spirit of God shall henceforth discern the word of God regardless of whence it appears to take origin. Divine truth must not be discounted because the channel of its bestowal is apparently human. Many of your brethren have minds which accept the theory of God while they spiritually fail to realize the presence of God. And that is just the reason why I have so often taught you that the kingdom of heaven can best be realized by acquiring the spiritual attitude of a sincere child. It is not the mental immaturity of the child that I commend to you but rather the spiritual simplicity of such an easy-believing and fully-trusting little one. It is not so important that you should know about the fact of God as that you should increasingly grow in the ability to feel the presence of God.

155:6.13 When you once begin to find God in your soul, presently you will begin to discover him in other men's souls and eventually in all the creatures and creations of a mighty universe. But what chance does the Father have to appear as a God of supreme loyalties and divine ideals in the souls of men who give little or no time to the thoughtful contemplation of such eternal realities? While the mind is not the seat of the spiritual nature, it is indeed the gateway thereto.

155:6.14 But do not make the mistake of trying to prove to other men that you have found God; you cannot consciously produce such valid proof, albeit there are two positive and powerful demonstrations of the fact that you are God- knowing, and they are:

155:6.17 Now, mistake not, my Father will ever respond to the faintest flicker of faith. He takes note of the physical and superstitious emotions of the primitive man. And with those honest but fearful souls whose faith is so weak that it amounts to little more than an intellectual conformity to a passive attitude of assent to religions of authority, the Father is ever alert to honor and foster even all such feeble attempts to reach out for him. But you who have been called out of darkness into the light are expected to believe with a whole heart; your faith shall dominate the combined attitudes of body, mind, and spirit.

155:6.18 You are my apostles, and to you religion shall not become a theologic shelter to which you may flee in fear of facing the rugged realities of spiritual progress and idealistic adventure; but rather shall your religion become the fact of real experience which testifies that God has found you, idealized, ennobled, and spiritualized you, and that you have enlisted in the eternal adventure of finding the God who has thus found and sonshipped you.