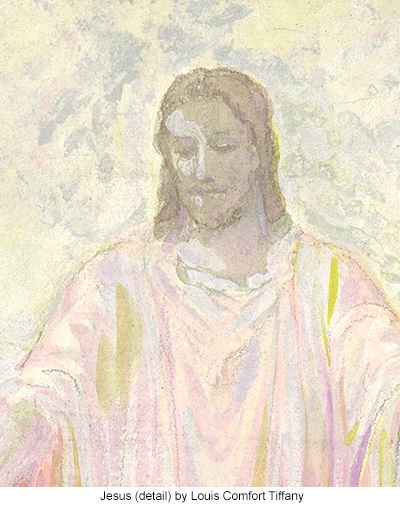 176:2.1On several occasions Jesus had made statements which led his hearers to infer that, while he intended presently to leave this world, he would most certainly return to consummate the work of the heavenly kingdom. As the conviction grew on his followers that he was going to leave them, and after he had departed from this world, it was only natural for all believers to lay fast hold upon these promises to return. The doctrine of the second coming of Christ thus became early incorporated into the teachings of the Christians, and almost every subsequent generation of disciples has devoutly believed this truth and has confidently looked forward to his sometime coming.

176:2.2 If they were to part with their Master and Teacher, how much more did these first disciples and the apostles grasp at this promise to return, and they lost no time in associating the predicted destruction of Jerusalem with this promised second coming. And they continued thus to interpret his words notwithstanding that, throughout this evening of instruction on Mount Olivet, the Master took particular pains to prevent just such a mistake.

176:2.3 In further answer to Peter's question, Jesus said: "Why do you still look for the Son of Man to sit upon the throne of David and expect that the material dreams of the Jews will be fulfilled? Have I not told you all these years that my kingdom is not of this world? The things which you now look down upon are coming to an end, but this will be a new beginning out of which the gospel of the kingdom will go to all the world and this salvation will spread to all peoples. And when the kingdom shall have come to its full fruition, be assured that the Father in heaven will not fail to visit you with an enlarged revelation of truth and an enhanced demonstration of righteousness, even as he has already bestowed upon this world him who became the prince of darkness , and then Adam, who was followed by Melchizedek, and in these days, the Son of Man. And so will my Father continue to manifest his mercy and show forth his love, even to this dark and evil world. So also will I, after my Father has invested me with all power and authority, continue to follow your fortunes and to guide in the affairs of the kingdom by the presence of my spirit, who shall shortly be poured out upon all flesh. Even though I shall thus be present with you in spirit, I also promise that I will sometime return to this world, where I have lived this life in the flesh and achieved the experience of simultaneously revealing God to man and leading man to God. Very soon must I leave you and take up the work the Father has intrusted to my hands, but be of good courage, for I will sometime return. In the meantime, my Spirit of the Truth of a universe shall comfort and guide you.

176:2.5 "But the times of the reappearing of the Son of Man are known only in the councils of Paradise, not even the angels of heaven know when this will occur. However, you should understand that, when this gospel of the kingdom shall have been proclaimed to all the world for the salvation of all peoples, and when the fullness of the age has come to pass, the Father will send you another dispensational bestowal, or else the Son of Man will return to adjudge the age.

176:2.6 "And now concerning the travail of Jerusalem, about which I have spoken to you, even this generation will not pass away until my words are fulfilled; but concerning the times of the coming again of the Son of Man, no one in heaven or on earth may presume to speak. But you should be wise regarding the ripening of an age; you should be alert to discern the signs of the times. You know when the fig tree shows its tender branches and puts forth its leaves that summer is near. Likewise, when the world has passed through the long winter of material-mindedness and you discern the coming of the spiritual springtime of a new dispensation, should you know that the summertime of a new visitation draws near.

176:2.7 "But what is the significance of this teaching having to do with the coming of the Sons of God? Do you not perceive that, when each of you is called to lay down his life struggle and pass through the portal of death, you stand in the immediate presence of judgment, and that you are face to face with the facts of a new dispensation of service in the eternal plan of the infinite Father? What the whole world must face as a literal fact at the end of an age, you, as individuals, must each most certainly face as a personal experience when you reach the end of your natural life and thereby pass on to be confronted with the conditions and demands inherent in the next revelation of the eternal progression of the Father's kingdom."

176:2.8 Of all the discourses which the Master gave his apostles, none ever became so confused in their minds as this one, given this Tuesday evening on the Mount of Olives, regarding the twofold subject of the destruction of Jerusalem and his own second coming. There was, therefore, little agreement between the subsequent written accounts based on the memories of what the Master said on this extraordinary occasion. Consequently, when the records were left blank concerning much that was said that Tuesday evening, there grew up many traditions; and very early in the second century a Jewish apocalyptic about the Messiah written by one Selta, who was attached to the court of the Emperor Caligula, was bodily copied into the Matthew Gospel and subsequently added (in p art) to the Mark and Luke records. It was in these writings of Selta that the parable of the ten virgins appeared. No part of the gospel record ever suffered such confusing misconstruction as this evening's teaching. But the Apostle John never became thus confused.

176:2.9 As these thirteen men resumed their journey toward the camp, they were speechless and under great emotional tension. Judas had finally confirmed his decision to abandon his associates. It was a late hour when David Zebedee, John Mark, and a number of the leading disciples welcomed Jesus and the twelve to the new camp, but the apostles did not want to sleep; they wanted to know more about the destruction of Jerusalem, the Master's departure, and the end of the world.