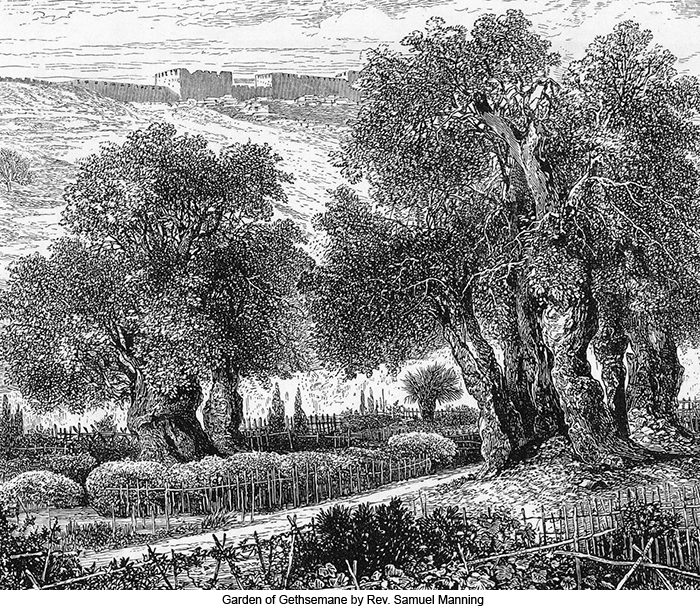 ABOUT SEVEN O'CLOCK on this Tuesday morning Jesus met the apostles, the women's corps, and some two dozen other prominent disciples at the home of Simon. At this meeting he said farewell to Lazarus, giving him that instruction which led him so soon to flee to Philadelphia in Perea, where he later became connected with the missionary movement having its headquarters in that city. Jesus also said good-bye to the aged Simon, and gave his parting advice to the women's corps, as he never again formally addressed them.

174:0.2 This morning he greeted each of the twelve with a personal salutation. To Andrew he said: "Be not dismayed by the events just ahead. Keep a firm hold on your brethren and see that they do not find you downcast." To Peter he said: "Put not your trust in the arm of flesh nor in weapons of steel. Establish yourself on the spiritual foundations of the eternal rocks." To James he said: "Falter not because of outward appearances. Remain firm in your faith, and you shall soon know of the reality of that which you believe." To John he said: "Be gentle; love even your enemies; be tolerant. And remember that I have trusted you with many things." To Nathaniel he said: "Judge not by appearances; remain firm in your faith when all appears to vanish; be true to your commission as an ambassador of the kingdom." To Philip he said: "Be unmoved by the events now impending. Remain unshaken, even when you cannot see the way. Be loyal to your oath of consecration." To Matthew he said: "Forget not the mercy that received you into the kingdom. Let no man cheat you of your eternal reward. As you have withstood the inclinations of the mortal nature, be willing to be steadfast." To Thomas he said: "No matter how difficult it may be, just now you must walk by faith and not by sight. Doubt not that I am able to finish the work I have begun, and that I shall eventually see all of my faithful ambassadors in the kingdom beyond." To the Alpheus twins he said: "Do not allow the things which you cannot understand to crush you. Be true to the affectionsof your hearts and put not your trust in either great men or the changing attitude of the people. Stand by your brethren." And to Simon Zelotes he said: "Simon, you may be crushed by disappointment, but your spirit shall rise above all that may come upon you. What you have failed to learn from me, my spirit will teach you. Seek the true realities of the spirit and cease to be attracted by unreal and material shadows." And to Judas Iscariot he said: "Judas, I have loved you and have prayed that you would love your brethren. Be not weary in well doing; and I would warn you to beware the slippery paths of flattery and the poison darts of ridicule."

174:0.3 And when he had concluded these greetings, he departed for Jerusalem with Andrew, Peter, James, and John as the other apostles set about the establishment of the Gethsemane camp, where they were to go that night, and where they made their headquarters for the remainder of the Master's life in the flesh. About halfway down the slope of Olivet Jesus paused and visited more than an hour with the four apostles.