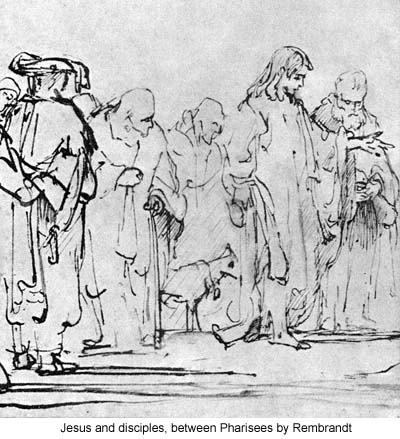 LATE ON MONDAY evening, March 6, Jesus and the ten apostles arrived at the Pella camp. This was the last week of Jesus' sojourn there, and he was very active in teaching the multitude and instructing the apostles. He preached every afternoon to the crowds and each night answered questions for the apostles and certain of the more advanced disciples residing at the camp.

169:0.2 Word regarding the resurrection of Lazarus had reached the encampment two days before the Master's arrival, and the entire assembly was agog. Not since the feeding of the five thousand had anything occurred which so aroused the imagination of the people. And thus it was at the very height of the second phase of the public ministry of the kingdom that Jesus planned to teach this one short week at Pella and then to begin the tour of southern Perea which led right up to the final and tragic experiences of the last week in Jerusalem.

169:0.3 The Pharisees and the chief priests had begun to formulate their charges and to crystallize their accusations. They objected to the Master's teachings on these grounds:

169:0.4 1. He is a friend of publicans and sinners; he receives the ungodly and even eats with them.

169:0.6 3. He is a lawbreaker. He heals disease on the Sabbath and in many other ways flouts the sacred law of Israel.

169:0.7 4. He is in league with devils. He works wonders and does seeming miracles by the power of Beelzebub, the prince of devils.