JESUS planned to spend this Thursday, his last free day on earth as a divine Son incarnated in the flesh, with his apostles and a few loyal and devoted disciples. Soon after the breakfast hour on this beautiful morning, the Master led them to a secluded spot a short distance above their camp and there taught them many new truths. Although Jesus delivered other discourses to the apostles during the early evening hours of the day, this talk of Thursday forenoon was his farewell address to the combined camp group of apostles and chosen disciples, both Jews and gentiles. The twelve were all present save Judas. Peter and several of the apostles remarked about his absence, and some of them thought Jesus had sent him into the city to attend to some matter, probably to arrange the details of their forthcoming celebration of the Passover. Judas did not return to the camp until midafternoon, a short time before Jesus led the twelve into Jerusalem to partake of the Last Supper.

178:2.2 By noon of this day all the apostles and disciples had learned about the hasty flight of Lazarus from Bethany. They began to sense the grim determination of the Jewish rulers to exterminate Jesus and his teachings.

178:2.3 David Zebedee, through the work of his secret agents in Jerusalem, was fully advised concerning the progress of the plan to arrest and kill Jesus. He knew all about the part of Judas in this plot, but he never disclosed this knowledge to the other apostles nor to any of the disciples. Shortly after lunch he did lead Jesus aside and, making bold, asked him whether he knew—but he never got further with his question. The Master, holding up his hand, stopped him, saying: "Yes, David, I know all about it, and I know that you know, but see to it that you tell no man. Only doubt not in your own heart that the will of God will prevail in the end."

178:2.4 This conversation with David was interrupted by the arrival of a messenger from Philadelphia bringing word that Abner had heard of the plot to kill Jesus and asking if he should depart for Jerusalem. This runner hastened off for Philadelphia with this word for Abner: "Go on with your work. If I depart from you in the flesh, it is only that I may return in the spirit. I will not forsake you. I will be with you to the end."

178:2.5 About this time Philip came to the Master and asked: "Master, seeing that the time of the Passover draws near, where would you have us prepare to eat it?" And when Jesus heard Philip's question, he answered: "Go and bring Peter and John, and I will give you directions concerning the supper we will eat together this night. As for the Passover, that you will have to consider after we have first done this."

178:2.6 When Judas heard the Master speaking with Philip about these matters, he drew closer that he might overhear their conversation. But David Zebedee, who was standing near, stepped up and engaged Judas in conversation while Philip, Peter, and John went to one side to talk with the Master.

178:2.7 Said Jesus to the three: "Go immediately into Jerusalem, and as you enter the gate, you will meet a man bearing a water pitcher. He will speak to you, and then shall you follow him. When he leads you to a certain house, go in after him and ask of the good man of that house, `Where is the guest chamber wherein the Master is to eat supper with his apostles?' And when you have thus inquired, this householder will show you a large upper room all furnished and ready for us."

178:2.8 When the apostles reached the city, they met the man with the water pitcher near the gate and followed on after him to the home of John Mark, where the lad's father met them and showed them the upper room in readiness for the evening meal. 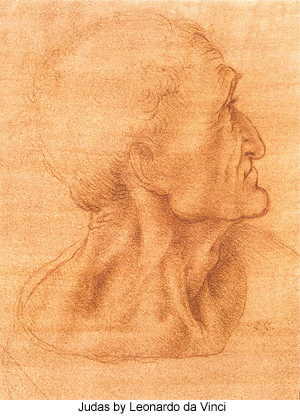 178:2.9 And all of this came to pass as the result of an understanding arrived at between the Master and John Mark during the afternoon of the preceding day when they were alone in the hills. Jesus wanted to be sure he would have this one last meal undisturbed with his apostles, and believing if Judas knew beforehand of their place of meeting he might arrange with his enemies to take him, he made this secret arrangement with John Mark. In this way Judas did not learn of their place of meeting until later on when he arrived there in company with Jesus and the other apostles.

178:2.10 David Zebedee had much business to transact with Judas so that he was easily prevented from following Peter, John, and Philip, as he so much desired to do. When Judas gave David a certain sum of money for provisions, David said to him: "Judas, might it not be well, under the circumstances, to provide me with a little money in advance of my actual needs?" And after Judas had reflected for a moment, he answered: "Yes, David, I think it would be wise. In fact, in view of the disturbed conditions in Jerusalem, I think it would be best for me to turn over all the money to you. They plot against the Master, and in case anything should happen to me, you would not be hampered."

178:2.11 And so David received all the apostolic cash funds and receipts for all money on deposit. Not until the evening of the next day did the apostles learn of this transaction.

178:2.12 It was about half past four o'clock when the three apostles returned and informed Jesus that everything was in readiness for the supper. The Master immediately prepared to lead his twelve apostles over the trail to the Bethany road and on into Jerusalem. And this was the last journey he ever made with all twelve of them.