The Journey To Jerusalem - Jesus Meets Mary, Martha And Lazarus 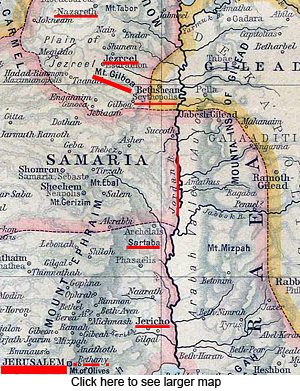 124:6.1 Jesus, having now reached the threshold of young manhood and having been formally graduated from the synagogue schools, was qualified to proceed to Jerusalem with his parents to participate with them in the celebration of his first Passover. The Passover feast of this year fell on Saturday, April 9, A.D. 7. A considerable company (103) made ready to depart from Nazareth early Monday morning, April 4, for Jerusalem. They journeyed south toward Samaria, but on reaching Jezreel, they turned east, going around Mount Gilboa into the Jordan valley in order to avoid passing through Samaria. Joseph and his family would have enjoyed going down through Samaria by way of Jacob's Well and Bethel, but since the Jews disliked to deal with the Samaritans, they decided to go with their neighbors by way of the Jordan valley.

124:6.2 The much-dreaded Archelaus had been deposed, and they had little to fear in taking Jesus to Jerusalem. Twelve years had passed since the first Herod had sought to destroy the babe of Bethlehem, and no one would now think of associating that affair with this obscure lad of Nazareth.

124:6.3 Before reaching the Jezreel junction, and as they journeyed on, very soon, on the left, they passed the ancient village of Shunem, and Jesus heard again about the most beautiful maiden of all Israel who once lived there and also about the wonderful works Elisha performed there. In passing by Jezreel, Jesus' parents recounted the doings of Ahab and Jezebel and the exploits of Jehu. In passing around Mount Gilboa, they talked much about Saul, who took his life on the slopes of this mountain, King David, and the associations of this historic spot.

124:6.4 As they rounded the base of Gilboa, the pilgrims could see the Greek city of Scythopolis on the right. They gazed upon the marble structures from a distance but went not near the gentile city lest they so defile themselves that they could not participate in the forthcoming solemn and sacred ceremonies of the Passover at Jerusalem. Mary could not understand why neither Joseph nor Jesus would speak of Scythopolis. She did not know about their controversy of the previous year as they had never revealed this episode to her.

124:6.5 The road now led immediately down into the tropical Jordan valley, and soon Jesus was to have exposed to his wondering gaze the crooked and ever-winding Jordan with its glistening and rippling waters as it flowed down toward the Dead Sea. They laid aside their outer garments as they journeyed south in this tropical valley, enjoying the luxurious fields of grain and the beautiful oleanders laden with their pink blossoms, while massive snow-capped Mount Hermon stood far to the north, in majesty looking down on the historic valley. A little over three hours' travel from opposite Scythopolis they came upon a bubbling spring, and here they camped for the night, out under the starlit heavens.

124:6.6 On their second day's journey they passed by where the Jabbok, from the east, flows into the Jordan, and looking east up this river valley, they recounted the days of Gideon, when the Midianites poured into this region to overrun the land. Toward the end of the second day's journey they camped near the base of the highest mountain overlooking the Jordan valley, Mount Sartaba, whose summit was occupied by the Alexandrian fortress where Herod had imprisoned one of his wives and buried his two strangled sons

124:6.7 The third day they passed by two villages which had been recently built by Herod and noted their superior architecture and their beautiful palm gardens. By nightfall they reached Jericho, where they remained until the morrow. That evening Joseph, Mary, and Jesus walked a mile and a half to the site of the ancient Jericho, where Joshua, for whom Jesus was named, had performed his renowned exploits, according to Jewish tradition.

124:6.8 By the fourth and last day's journey the road was a continuous procession of pilgrims. They now began to climb the hills leading up to Jerusalem. As they neared the top, they could look across the Jordan to the mountains beyond and south over the sluggish waters of the Dead Sea. About halfway up to Jerusalem, Jesus gained his first view of the Mount of Olives (the region to be so much a part of his subsequent life), and Joseph pointed out to him that the Holy City lay just beyond this ridge, and the lad's heart beat fast with joyous anticipation of soon beholding the city and house of his heavenly Father.

124:6.9 On the eastern slopes of Olivet they paused for rest in the borders of a little village called Bethany. The hospitable villagers poured forth to minister to the pilgrims, and it happened that Joseph and his family had stopped near the house of one Simon, who had three children about the same age as Jesus—Mary, Martha, and Lazarus. They invited the Nazareth family in for refreshment, and a lifelong friendship sprang up between the two families. Many times afterward, in his eventful life, Jesus stopped in this home. 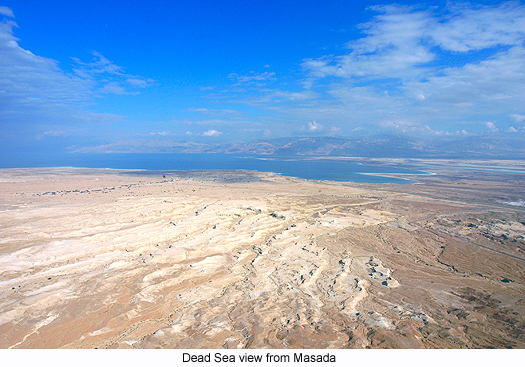