Jesus Is Warned To Flee From Herod. "Oh, Jerusalem, Jerusalem...!" 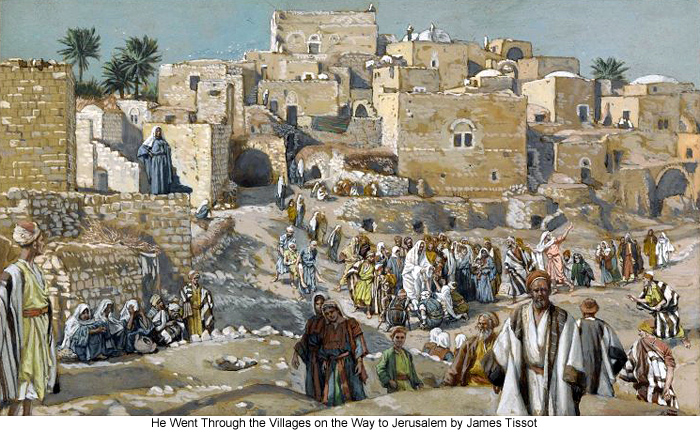 171:4.4 It was here at Livias, just after breakfast, that certain friendly Pharisees came to Jesus and said: "Flee in haste from these parts, for Herod, just as he sought John, now seeks to kill you. He fears an uprising of the people and has decided to kill you. We bring you this warning that you may escape."

171:4.5 And this was partly true. The resurrection of Lazarus frightened and alarmed Herod, and knowing that the Sanhedrin had dared to condemn Jesus, even in advance of a trial, Herod made up his mind either to kill Jesus or to drive him out of his domains. He really desired to do the latter since he so feared him that he hoped he would not be compelled to execute him.

171:4.6 When Jesus heard what the Pharisees had to say, he replied: "I well know about Herod and his fear of this gospel of the kingdom. But, mistake not, he would much prefer that the Son of Man go up to Jerusalem to suffer and die at the hands of the chief priests; he is not anxious, having stained his hands with the blood of John, to become responsible for the death of the Son of Man. Go you and tell that fox that the Son of Man preaches in Perea today, tomorrow goes into Judea, and after a few days, will be perfected in his mission on earth and prepared to ascend to the Father."

171:4.7 Then turning to his apostles, Jesus said: "From olden times the prophets have perished in Jerusalem, and it is only befitting that the Son of Man should go up to the city of the Father's house to be offered up as the price of human bigotry and as the result of religious prejudice and spiritual blindness. O Jerusalem, Jerusalem, which kills the prophets and stones the teachers of truth! How often would I have gathered your children together even as a hen gathers her own brood under her wings, but you would not let me do it! Behold, your house is about to be left to you desolate! You will many times desire to see me, but you shall not. You will then seek but not find me." And when he had spoken, he turned to those around him and said: "Nevertheless, let us go up to Jerusalem to attend the Passover and do that which becomes us in fulfilling the will of the Father in heaven."

171:4.8 It was a confused and bewildered group of believers who this day followed Jesus into Jericho. The apostles could discern only the certain note of final triumph in Jesus' declarations regarding the kingdom; they just could not bring themselves to that place where they were willing to grasp the warnings of the impending setback. When Jesus spoke of "rising on the third day,"they seized upon this statement as signifying a sure triumph of the kingdom immediately following an unpleasant preliminary skirmish with the Jewish religious leaders. The "third day" was a common Jewish expression signifying "presently" or "soon thereafter." When Jesus spoke of "rising," they thought he referred to the "rising of the kingdom."

171:4.9 Jesus had been accepted by these believers as the Messiah, and the Jews knew little or nothing about a suffering Messiah. They did not understand that Jesus was to accomplish many things by his death which could never have been achieved by his life. While it was the resurrection of Lazarus that nerved the apostles to enter Jerusalem, it was the memory of the transfiguration that sustained the Master at this trying period of his bestowal.