Jesus Is Returned To Pilate - Crucify Him! 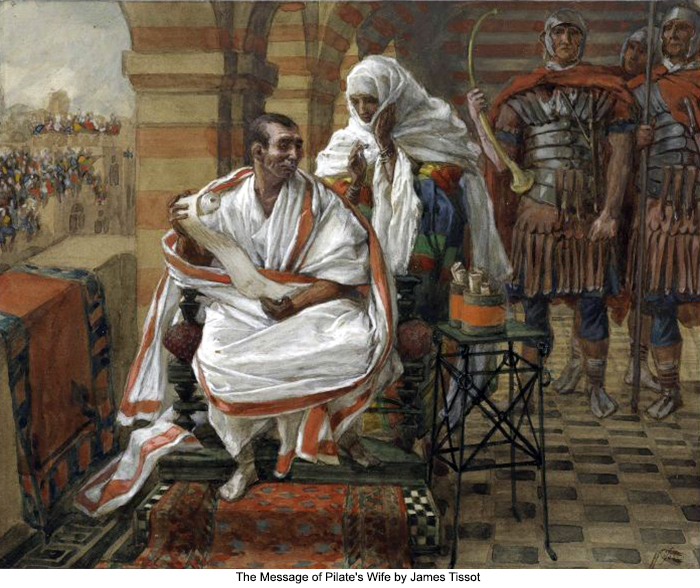 185:5.1 When the guards had brought Jesus back to Pilate, he went out on the front steps of the praetorium, where his judgment seat had been placed, and calling together the chief priests and Sanhedrists, said to them: "You brought this man before me with charges that he perverts the people, forbids the payment of taxes, and claims to be king of the Jews. I have examined him and fail to find him guilty of these charges. In fact, I find no fault in him. Then I sent him to Herod, and the Tetrarch must have reached the same conclusion since he has sent him back to us. Certainly, nothing worthy of death has been done by this man. If you still think he needs to be disciplined, I am willing to chastise him before I release him."

185:5.2 Just as the Jews were about to engage in shouting their protests against the release of Jesus, a vast crowd came marching up to the praetorium for the purpose of asking Pilate for the release of a prisoner in honor of the Passover feast. For some time it had been the custom of the Roman governors to allow the populace to choose some imprisoned or condemned man for pardon at the time of the Passover. And now that this crowd had come before him to ask for the release of a prisoner, and since Jesus had so recently been in great favor with the multitudes, it occurred to Pilate that he might possibly extricate himself from his predicament by proposing to this group that, since Jesus was now a prisoner before his judgment seat, he release to them this man of Galilee as the token of Passover good will.

185:5.3 As the crowd surged up on the steps of the building, Pilate heard them calling out the name of one Barabbas. Barabbas was a noted political agitator and murderous robber, the son of a priest, who had recently been apprehended in the act of robbery and murder on the Jericho road. This man was under sentence to die as soon as the Passover festivities were over.

185:5.4 Pilate stood up and explained to the crowd that Jesus had been brought to him by the chief priests, who sought to have him put to death on certain charges, and that he did not think the man was worthy of death. Said Pilate: "Which, therefore, would you prefer that I release to you, this Barabbas, the murderer, or this Jesus of Galilee?" And when Pilate had thus spoken, the chief priests and the Sanhedrin councilors all shouted at the top of their voices, "Barabbas, Barabbas!" And when the people saw that the chief priests were minded to have Jesus put to death, they quickly joined in the clamor for his life while they loudly shouted for the release of Barabbas.

185:5.5 A few days before this the multitude had stood in awe of Jesus, but the mob did not look up to one who, having claimed to be the Son of God, now found himself in the custody of the chief priests and the rulers and on trial before Pilate for his life. Jesus could be a hero in the eyes of the populace when he was driving the money-changers and the traders out of the temple, but not when he was a nonresisting prisoner in the hands of his enemies and on trial for his life.

185:5.6 Pilate was angered at the sight of the chief priests clamoring for the pardon of a notorious murderer while they shouted for the blood of Jesus. He saw their malice and hatred and perceived their prejudice and envy. Therefore he said to them: "How could you choose the life of a murderer in preference to this man's whose worst crime is that he figuratively calls himself the king of the Jews?" But this was not a wise statement for Pilate to make. The Jews were a proud people, now subject to the Roman political yoke but hoping for the coming of a Messiah who would deliver them from gentile bondage with a great show of power and glory. They resented, more than Pilate could know, the intimation that this meek-mannered teacher of strange doctrines, now under arrest and charged with crimes worthy of death, should be referred to as "the king of the Jews." They looked upon such a remark as an insult to everything which they held sacred and honorable in their national existence, and therefore did they all let loose their mighty shouts for Barabbas's release and Jesus' death. 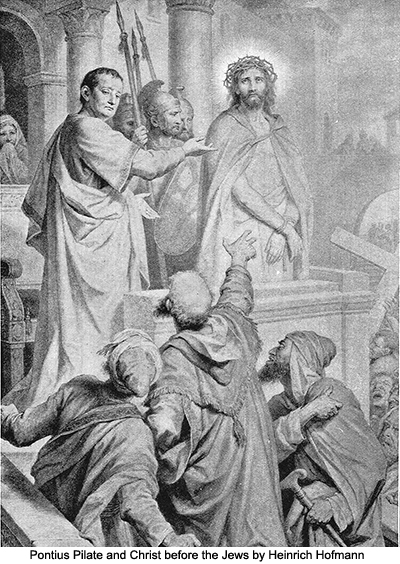 185:5.7 Pilate knew Jesus was innocent of the charges brought against him, and had he been a just and courageous judge, he would have acquitted him and turned him loose. But he was afraid to defy these angry Jews, and while he hesitated to do his duty, a messenger came up and presented him with a sealed message from his wife, Claudia.

185:5.8 Pilate indicated to those assembled before him that he wished to read the communication which he had just received before he proceeded further with the matter before him. When Pilate opened this letter from his wife, he read: "I pray you have nothing to do with this innocent and just man whom they call Jesus. I have suffered many things in a dream this night because of him." This note from Claudia not only greatly upset Pilate and thereby delayed the adjudication of this matter, but it unfortunately also provided considerable time in which the Jewish rulers freely circulated among the crowd and urged the people to call for the release of Barabbas and to clamor for the crucifixion of Jesus.

185:5.9 Finally, Pilate addressed himself once more to the solution of the problem which confronted him, by asking the mixed assembly of Jewish rulers and the pardon-seeking crowd, "What shall I do with him who is called the king of the Jews?" And they all shouted with one accord, "Crucify him! Crucify him!" The unanimity of this demand from the mixed multitude startled and alarmed Pilate, the unjust and fear-ridden judge.

185:5.10 Then once more Pilate said: "Why would you crucify this man? What evil has he done? Who will come forward to testify against him?" But when they heard Pilate speak in defense of Jesus, they only cried out all the more, "Crucify him! Crucify him!"

185:5.11 Then again Pilate appealed to them regarding the release of the Passover prisoner, saying: "Once more I ask you, which of these prisoners shall I release to you at this, your Passover time?" And again the crowd shouted, "Give us Barabbas!"

185:5.12 Then said Pilate: "If I release the murderer, Barabbas, what shall I do with Jesus?" And once more the multitude shouted in unison, "Crucify him! Crucify him!"

185:5.13 Pilate was terrorized by the insistent clamor of the mob, acting under the direct leadership of the chief priests and the councilors of the Sanhedrin; nevertheless, he decided upon at least one more attempt to appease the crowd and save Jesus.