Home Jesus Illustrated Stories Jesus Is Confronted By His Enemies

Jesus Is Confronted By His Enemies

150:9.1 Jesus found himself surrounded in the synagogue by a great throng of his enemies and a sprinkling of his own followers, and in reply to their rude questions and sinister banterings he half humorously remarked: "Yes, I am Joseph's son; I am the carpenter, and I am not surprised that you remind me of the proverb, `Physician heal yourself,' and that you challenge me to do in Nazareth what you have heard I did at Capernaum; but I call you to witness that even the Scriptures declare that `a prophet is not without honor save in his own country and among his own people.'"

150:9.2 But they jostled him and, pointing accusing fingers at him, said: "You think you are better than the people of Nazareth; you moved away from us, but your brother is a common workman, and your sisters still live among us. We know your mother, Mary. Where are they today? We hear big things about you, but we notice that you do no wonders when you come back." Jesus answered them: "I love the people who dwell in the city where I grew up, and I would rejoice to see you all enter the kingdom of heaven, but the doing of the works of God is not for me to determine. The transformations of grace are wrought in response to the living faith of those who are the beneficiaries." 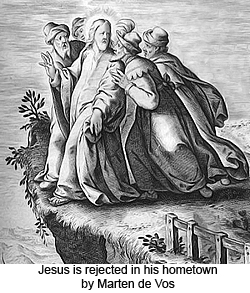 150:9.3 Jesus would have good-naturedly managed the crowd and effectively disarmed even his violent enemies had it not been for the tactical blunder of one of his own apostles, Simon Zelotes, who, with the help of Nahor, one of the younger evangelists, had meanwhile gathered together a group of Jesus' friends from among the crowd and, assuming a belligerent attitude, had served notice on the enemies of the Master to go hence. Jesus had long taught the apostles that a soft answer turns away wrath, but his followers were not accustomed to seeing their beloved teacher, whom they so willingly called Master, treated with such discourtesy and disdain. It was too much for them, and they found themselves giving expression to passionate and vehement resentment, all of which only tended to arouse the mob spirit in this ungodly and uncouth assembly. And so, under the leadership of hirelings, these ruffians laid hold upon Jesus and rushed him out of the synagogue to the brow of a near-by precipitous hill, where they were minded to shove him over the edge to his death below. But just as they were about to push him over the edge of the cliff, Jesus turned suddenly upon his captors and, facing them, quietly folded his arms. He said nothing, but his friends were more than astonished when, as he started to walk forward, the mob parted and permitted him to pass on unmolested.

150:9.4 Jesus, followed by his disciples, proceeded to their encampment, where all this was recounted. And they made ready that evening to go back to Capernaum early the next day, as Jesus had directed. This turbulent ending of the third public preaching tour had a sobering effect upon all of Jesus' followers. They were beginning to realize the meaning of some of the Master's teachings; they were awaking to the fact that the kingdom would come only through much sorrow and bitter disappointment.

150:9.5 They left Nazareth this Sunday morning, and traveling by different routes, they all finally assembled at Bethsaida by noon on Thursday, March 10. They came together as a sober and serious group of disillusioned preachers of the gospel of truth and not as an enthusiastic and all-conquering band of triumphant crusaders.