Three Hours Of Interrogation At the Palace Of Annas 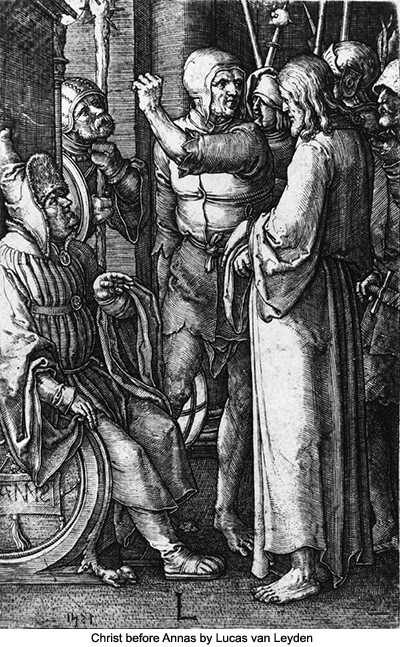 REPRESENTATIVES OF ANNAS had secretly instructed the captain of the Roman soldiers to bring Jesus immediately to the palace of Annas after he had been arrested. The former high priest desired to maintain his prestige as the chief ecclesiastical authority of the Jews. He also had another purpose in detaining Jesus at his house for several hours, and that was to allow time for legally calling together the court of the Sanhedrin. It was not lawful to convene the Sanhedrin court before the time of the offering of the morning sacrifice in the temple, and this sacrifice was offered about three o'clock in the morning.

184:0.2 Annas knew that a court of Sanhedrists was in waiting at the palace of his son-in-law, Caiaphas. Some thirty members of the Sanhedrin had gathered at the home of the high priest by midnight so that they would be ready to sit in judgment on Jesus when he might be brought before them. Only those members were assembled who were strongly and openly opposed to Jesus and his teaching since it required only twenty-three to constitute a trial court.

184:0.3 Jesus spent about three hours at the palace of Annas on Mount Olivet, not far from the garden of Gethsemane, where they arrested him. John Zebedee was free and safe in the palace of Annas not only because of the word of the Roman captain, but also because he and his brother James were well known to the older servants, having many times been guests at the palace as the former high priest was a distant relative of their mother, Salome.

184:1.1 Annas, enriched by the temple revenues, his son-in-law the acting high priest, and with his relations to the Roman authorities, was indeed the most powerful single individual in all Jewry. He was a suave and politic planner and plotter. He desired to direct the matter of disposing of Jesus; he feared to trust such an important undertaking wholly to his brusque and aggressive son-in-law. Annas wanted to make sure that the Master's trial was kept in the hands of the Sadducees; he feared the possible sympathy of some of the Pharisees, seeing that practically all of those members of the Sanhedrin who had espoused the cause of Jesus were Pharisees.

184:1.2 Annas had not seen Jesus for several years, not since the time when the Master called at his house and immediately left upon observing his coldness and reserve in receiving him. Annas had thought to presume on this early acquaintance and thereby attempt to persuade Jesus to abandon his claims and leave Palestine. He was reluctant to participate in the murder of a good man and had reasoned that Jesus might choose to leave the country rather than to suffer death. But when Annas stood before the stalwart and determined Galilean, he knew at once that it would be useless to make such proposals. Jesus was even more majestic and well poised than Annas remembered him.

184:1.3 When Jesus was young, Annas had taken a great interest in him, but now his revenues were threatened by what Jesus had so recently done in driving the money-changers and other commercial traders out of the temple. This act had aroused the enmity of the former high priest far more than had Jesus' teachings.

184:1.4 Annas entered his spacious audience chamber, seated himself in a large chair, and commanded that Jesus be brought before him. After a few moments spent in silently surveying the Master, he said: "You realize that something must be done about your teaching since you are disturbing the peace and order of our country." As Annas looked inquiringly at Jesus, the Master looked full into his eyes but made no reply. Again Annas spoke, "What are the names of your disciples, besides Simon Zelotes, the agitator?" Again Jesus looked down upon him, but he did not answer.

184:1.5 Annas was considerably disturbed by Jesus' refusal to answer his questions, so much so that he said to him: "Do you have no care as to whether I am friendly to you or not? Do you have no regard for the power I have in determining the issues of your coming trial?" When Jesus heard this, he said: "Annas, you know that you could have no power over me unless it were permitted by my Father. Some would destroy the Son of Man because they are ignorant; they know no better, but you, friend, know what you are doing. How can you, therefore, reject the light of God?"

184:1.6 The kindly manner in which Jesus spoke to Annas almost bewildered him. But he had already determined in his mind that Jesus must either leave Palestine or die; so he summoned up his courage and asked: "Just what is it you are trying to teach the people? What do you claim to be?" Jesus answered: "You know full well that I have spoken openly to the world. I have taught in the synagogues and many times in the temple, where all the Jews and many of the gentiles have heard me. In secret I have spoken nothing; why, then, do you ask me about my teaching? Why do you not summon those who have heard me and inquire of them? Behold, all Jerusalem has heard that which I have spoken even if you have not yourself heard these teachings." But before Annas could make reply, the chief steward of the palace, who was standing near, struck Jesus in the face with his hand, saying, "How dare you answer the high priest with such words?" Annas spoke no words of rebuke to his steward, but Jesus addressed him, saying, "My friend, if I have spoken evil, bear witness against the evil; but if I have spoken the truth, why, then, should you smite me?"

184:1.7 Although Annas regretted that his steward had struck Jesus, he was too proud to take notice of the matter. In his confusion he went into another room, leaving Jesus alone with the household attendants and the temple guards for almost an hour.

184:1.8 When he returned, going up to the Master's side, he said, "Do you claim to be the Messiah, the deliverer of Israel?" Said Jesus: "Annas, you have known me from the times of my youth. You know that I claim to be nothing except that which my Father has appointed, and that I have been sent to all men, gentile as well as Jew." Then said Annas: "I have been told that you have claimed to be the Messiah; is that true?" Jesus looked upon Annas but only replied, "So you have said."

184:1.9 About this time messengers arrived from the palace of Caiaphas to inquire what time Jesus would be brought before the court of the Sanhedrin, and since it was nearing the break of day, Annas thought best to send Jesus bound and in the custody of the temple guards to Caiaphas. He himself followed after them shortly.