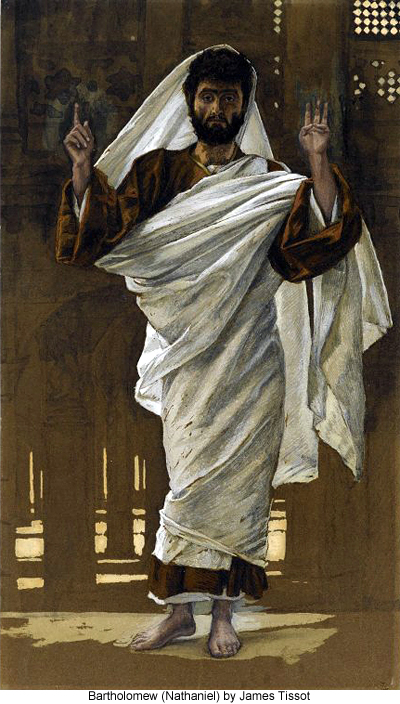 159:4.1 And then went Jesus over to Abila, where Nathaniel and his associates labored. Nathaniel was much bothered by some of Jesus' pronouncements which seemed to detract from the authority of the recognized Hebrew scriptures. Accordingly, on this night, after the usual period of questions and answers, Nathaniel took Jesus away from the others and asked: "Master, could you trust me to know the truth about the Scriptures? I observe that you teach us only a portion of the sacred writings-the best as I view it-and I infer that you reject the teachings of the rabbis to the effect that the words of the law are the very words of God, having been with God in heaven even before the times of Abraham and Moses. What is the truth about the Scriptures?" When Jesus heard the question of his bewildered apostle, he answered:

159:4.2 "Nathaniel, you have rightly judged; I do not regard the Scriptures as do the rabbis. I will talk with you about this matter on condition that you do not relate these things to your brethren, who are not all prepared to receive this teaching. The words of the law of Moses and the teachings of the Scriptures were not in existence before Abraham. Only in recent times have the Scriptures been gathered together as we now have them. While they contain the best of the higher thoughts and longings of the Jewish people, they also contain much that is far from being representative of the character and teachings of the Father in heaven; wherefore must I choose from among the better teachings those truths which are to be gleaned for the gospel of the kingdom.

159:4.3 "These writings are the work of men, some of them holy men, others not so holy. The teachings of these books represent the views and extent of enlightenment of the times in which they had their origin. As a revelation of truth, the last are more dependable than the first. The Scriptures are faulty and altogether human in origin, but mistake not, they do constitute the best collection of religious wisdom and spiritual truth to be found in all the world at this time.

159:4.4 "Many of these books were not written by the persons whose names they bear, but that in no way detracts from the value of the truths which they contain. If the story of Jonah should not be a fact, even if Jonah had never lived, still would the profound truth of this narrative, the love of God for Nineveh and the so-called heathen, be none the less precious in the eyes of all those who love their fellow men. The Scriptures are sacred because they present the thoughts and acts of men who were searching for God, and who in these writings left on record their highest concepts of righteousness, truth, and holiness. The Scriptures contain much that is true, very much, but in the light of your present teaching, you know that these writings also contain much that is misrepresentative of the Father in heaven, the loving God I have come to reveal to all the worlds.

159:4.5 "Nathaniel, never permit yourself for one moment to believe the Scripture records which tell you that the God of love directed your forefathers to go forth in battle to slay all their enemies-men, women, and children. Such records are the words of men, not very holy men, and they are not the word of God. The Scriptures always have, and always will, reflect the intellectual, moral, and spiritual status of those who create them. Have you not noted that the concepts of Yahweh grow in beauty and glory as the prophets make their records from Samuel to Isaiah? And you should remember that the Scriptures are intended for religious instruction and spiritual guidance. They are not the works of either historians or philosophers.

159:4.6 "The thing most deplorable is not merely this erroneous idea of the absolute perfection of the Scripture record and the infallibility of its teachings, but rather the confusing misinterpretation of these sacred writings by the tradition-enslaved scribes and Pharisees at Jerusalem. And now will they employ both the doctrine of the inspiration of the Scriptures and their misinterpretations thereof in their determined effort to withstand these newer teachings of the gospel of the kingdom. Nathaniel, never forget, the Father does not limit the revelation of truth to any one generation or to any one people. Many earnest seekers after the truth have been, and will continue to be, confused and disheartened by these doctrines of the perfection of the Scriptures.

159:4.7 "The authority of truth is the very spirit that indwells its living manifestations, and not the dead words of the less illuminated and supposedly inspired men of another generation. And even if these holy men of old lived inspired and spirit-filled lives, that does not mean that their words were similarly spiritually inspired. Today we make no record of the teachings of this gospel of the kingdom lest, when I have gone, you speedily become divided up into sundry groups of truth contenders as a result of the diversity of your interpretation of my teachings. For this generation it is best that we live these truths while we shun the making of records.

159:4.8 "Mark you well my words, Nathaniel, nothing which human nature has touched can be regarded as infallible. Through the mind of man divine truth may indeed shine forth, but always of relative purity and partial divinity. The creature may crave infallibility, but only the Creators possess it.

159:4.9 "But the greatest error of the teaching about the Scriptures is the doctrine of their being sealed books of mystery and wisdom which only the wise minds of the nation dare to interpret. The revelations of divine truth are not sealed except by human ignorance, bigotry, and narrow- minded intolerance. The light of the Scriptures is only dimmed by prejudice and darkened by superstition. A false fear of sacredness has prevented religion from being safeguarded by common sense. The fear of the authority of the sacred writings of the past effectively prevents the honest souls of today from accepting the new light of the gospel, the light which these very God-knowing men of another generation so intensely longed to see.

159:4.10 "But the saddest feature of all is the fact that some of the teachers of the sanctity of this traditionalism know this very truth. They more or less fully understand these limitations of Scripture, but they are moral cowards, intellectually dishonest. They know the truth regarding the sacred writings, but they prefer to withhold such disturbing facts from the people. And thus do they pervert and distort the Scriptures, making them the guide to slavish details of the daily life and an authority in things nonspiritual instead of appealing to the sacred writings as the repository of the moral wisdom, religious inspiration, and the spiritual teaching of the God-knowing men of other generations."

159:4.11 Nathaniel was enlightened, and shocked, by the Master's pronouncement. He long pondered this talk in the depths of his soul, but he told no man concerning this conference until after Jesus' ascension; and even then he feared to impart the full story of the Master's instruction.