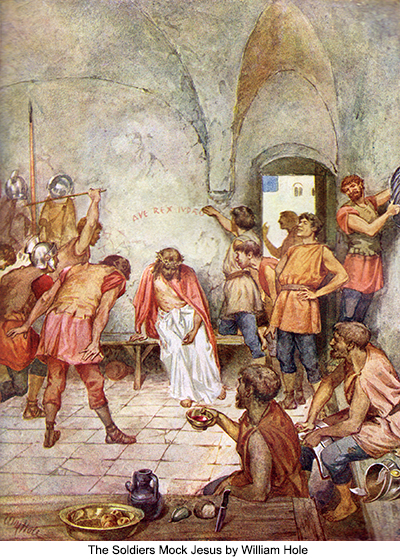 184:4.1 The Jewish law required that, in the matter of passing the death sentence, there should be two sessions of the court. This second session was to be held on the day following the first, and the intervening time was to be spent in fasting and mourning by the members of the court. But these men could not await the next day for the confirmation of their decision that Jesus must die. They waited only one hour. In the meantime Jesus was left in the audience chamber in the custody of the temple guards, who, with the servants of the high priest, amused themselves by heaping every sort of indignity upon the Son of Man. They mocked him, spit upon him, and cruelly buffeted him. They would strike him in the face with a rod and then say, "Prophesy to us, you the Deliverer, who it was that struck you." And thus they went on for one full hour, reviling and mistreating this unresisting man of Galilee.

184:4.2 During this tragic hour of suffering and mock trials before the ignorant and unfeeling guards and servants, John Zebedee waited in lonely terror in an adjoining room. When these abuses first started, Jesus indicated to John, by a nod of his head, that he should retire. The Master well knew that, if he permitted his apostle to remain in the room to witness these indignities, John's resentment would be so aroused as to produce such an outbreak of protesting indignation as would probably result in his death.

184:4.3 Throughout this awful hour Jesus uttered no word. To this gentle and sensitive soul of humankind, joined in personality relationship with the God of all this universe, there was no more bitter portion of his cup of humiliation than this terrible hour at the mercy of these ignorant and cruel guards and servants, who had been stimulated to abuse him by the example of the members of this so-called Sanhedrist court.

184:4.4 The human heart cannot possibly conceive of the shudder of indignation that swept out over a vast universe as the celestial intelligences witnessed this sight of their beloved Sovereign submitting himself to the will of his ignorant and misguided creatures on the sin-darkened sphere of unfortunate Urantia.

184:4.5 What is this trait of the animal in man which leads him to want to insult and physically assault that which he cannot spiritually attain or intellectually achieve? In the half-civilized man there still lurks an evil brutality which seeks to vent itself upon those who are superior in wisdom and spiritual attainment. Witness the evil coarseness and the brutal ferocity of these supposedly civilized men as they derived a certain form of animal pleasure from this physical attack upon the unresisting Son of Man. As these insults, taunts, and blows fell upon Jesus, he was undefending but not defenseless. Jesus was not vanquished, merely uncontending in the material sense.

184:4.6 These are the moments of the Master's greatest victories in all his long and eventful career as maker, upholder, and savior of a vast and far-flung universe. Having lived to the full a life of revealing God to man, Jesus is now engaged in making a new and unprecedented revelation of man to God. Jesus is now revealing to the worlds the final triumph over all fears of creature personality isolation. The Son of Man has finally achieved the realization of identity as the Son of God. Jesus does not hesitate to assert that he and the Father are one; and on the basis of the fact and truth of that supreme and supernal experience, he admonishes every kingdom believer to become one with him even as he and his Father are one. The living experience in the religion of Jesus thus becomes the sure and certain technique whereby the spiritually isolated and cosmically lonely mortals of earth are enabled to escape personality isolation, with all its consequences of fear and associated feelings of helplessness. In the fraternal realities of the kingdom of heaven the faith sons of God find final deliverance from the isolation of the self, both personal and planetary. The God-knowing believer increasingly experiences the ecstasy and grandeur of spiritual socialization on a universe scale—citizenship on high in association with the eternal realization of the divine destiny of perfection attainment.