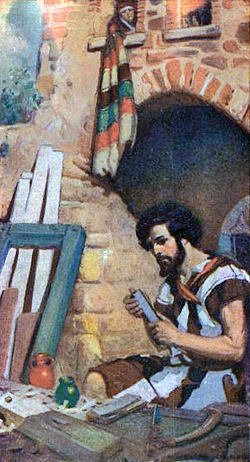 127:4.1 By this time Jesus and Mary were getting along much better. She regarded him less as a son; he had become to her more a father to her children. Each day's life swarmed with practical and immediate difficulties. Less frequently they spoke of his lifework, for, as time passed, all their thought was mutually devoted to the support and upbringing of their family of four boys and three girls.

127:4.2 By the beginning of this year Jesus had fully won his mother to the acceptance of his methods of child training—the positive injunction to do good in the place of the older Jewish method of forbidding to do evil. In his home and throughout his public-teaching career Jesus invariably employed the positive form of exhortation. Always and everywhere did he say, "You shall do this—you ought to do that." Never did he employ the negative mode of teaching derived from the ancient taboos. He refrained from placing emphasis on evil by forbidding it, while he exalted the good by commanding its performance. Prayer time in this household was the occasion for discussing anything and everything relating to the welfare of the family.

127:4.3 Jesus began wise discipline upon his brothers and sisters at such an early age that little or no punishment was ever required to secure their prompt and wholehearted obedience. The only exception was Jude, upon whom on sundry occasions Jesus found it necessary to impose penalties for his infractions of the rules of the home. On three occasions when it was deemed wise to punish Jude for self-confessed and deliberate violations of the family rules of conduct, his punishment was fixed by the unanimous decree of the older children and was assented to by Jude himself before it was inflicted.

127:4.4 While Jesus was most methodical and systematic in everything he did, there was also in all his administrative rulings a refreshing elasticity of interpretation and an individuality of adaptation that greatly impressed all the children with the spirit of justice which actuated their father-brother. He never arbitrarily disciplined his brothers and sisters, and such uniform fairness and personal consideration greatly endeared Jesus to all his family.

127:4.5 James and Simon grew up trying to follow Jesus' plan of placating their bellicose and sometimes irate playmates by persuasion and nonresistance, and they were fairly successful; but Joseph and Jude, while assenting to such teachings at home, made haste to defend themselves when assailed by their comrades; in particular was Jude guilty of violating the spirit of these teachings. But nonresistance was not a rule of the family. No penalty was attached to the violation of personal teachings.

127:4.6 In general, all of the children, particularly the girls, would consult Jesus about their childhood troubles and confide in him just as they would have in an affectionate father.

127:4.7 James was growing up to be a well-balanced and even-tempered youth, but he was not so spiritually inclined as Jesus. He was a much better student than Joseph, who, while a faithful worker, was even less spiritually minded. Joseph was a plodder and not up to the intellectual level of the other children. Simon was a well-meaning boy but too much of a dreamer. He was slow in getting settled down in life and was the cause of considerable anxiety to Jesus and Mary. But he was always a good and well-intentioned lad. Jude was a firebrand. He had the highest of ideals, but he was unstable in temperament. He had all and more of his mother's determination and aggressiveness, but he lacked much of her sense of proportion and discretion.

127:4.8 Miriam was a well-balanced and level-headed daughter with a keen appreciation of things noble and spiritual. Martha was slow in thought and action but a very dependable and efficient child. Baby Ruth was the sunshine of the home; though thoughtless of speech, she was most sincere of heart. She just about worshiped her big brother and father. But they did not spoil her. She was a beautiful child but not quite so comely as Miriam, who was the belle of the family, if not of the city.

127:4.9 As time passed, Jesus did much to liberalize and modify the family teachings and practices related to Sabbath observance and many other phases of religion, and to all these changes Mary gave hearty assent. By this time Jesus had become the unquestioned head of the house.

127:4.10 This year Jude started to school, and it was necessary for Jesus to sell his harp in order to defray these expenses. Thus disappeared the last of his recreational pleasures. He much loved to play the harp when tired in mind and weary in body, but he comforted himself with the thought that at least the harp was safe from seizure by the tax collector.