At Livias - Jesus' Followers Arm Themselves 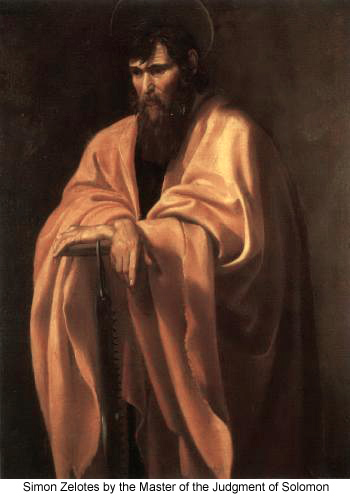 171:4.1 On Wednesday evening, March 29, Jesus and his followers encamped at Livias on their way to Jerusalem, after having completed their tour of the cities of southern Perea. It was during this night at Livias that Simon Zelotes and Simon Peter, having conspired to have delivered into their hands at this place more than one hundred swords, received and distributed these arms to all who would accept them and wear them concealed beneath their cloaks. Simon Peter was still wearing his sword on the night of the Master's betrayal in the garden.

171:4.2 Early on Thursday morning before the others were awake, Jesus called Andrew and said: "Awaken your brethren! I have something to say to them."Jesus knew about the swords and which of his apostles had received and were wearing these weapons, but he never disclosed to them that he knew such things. When Andrew had aroused his associates, and they had assembled off by themselves, Jesus said: "My children, you have been with me a long while, and I have taught you much that is needful for this time, but I would now warn you not to put your trust in the uncertainties of the flesh nor in the frailties of man's defense against the trials and testing which lie ahead of us. I have called you apart here by yourselves that I may once more plainly tell you that we are going up to Jerusalem, where you know the Son of Man has already been condemned to death. Again am I telling you that the Son of Man will be delivered into the hands of the chief priests and the religious rulers; that they will condemn him and then deliver him into the hands of the gentiles. And so will they mock the Son of Man, even spit upon him and scourge him, and they will deliver him up to death. And when they kill the Son of Man, be not dismayed, for I declare that on the third day he shall rise. Take heed to yourselves and remember that I have forewarned you."

171:4.3 Again were the apostles amazed, stunned; but they could not bring themselves to regard his words as literal; they could not comprehend that the Master meant just what he said. They were so blinded by their persistent belief in the temporal kingdom on earth, with headquarters at Jerusalem, that they simply could not—would not—permit themselves to accept Jesus' words as literal. They pondered all that day as to what the Master could mean by such strange pronouncements. But none of them dared to ask him a question concerning these statements. Not until after his death did these bewildered apostles wake up to the realization that the Master had spoken to them plainly and directly in anticipation of his crucifixion.