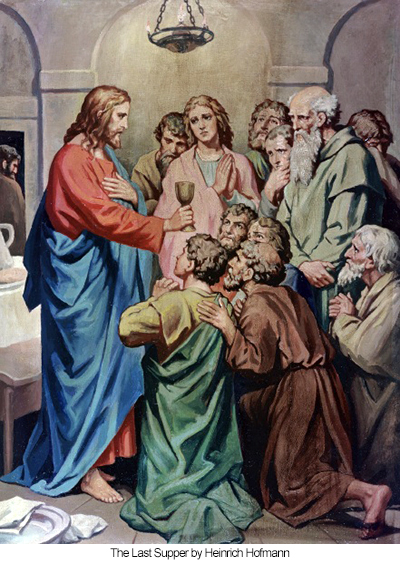 179:5.1 As they brought Jesus the third cup of wine, the "cup of blessing," he arose from the couch and, taking the cup in his hands, blessed it, saying: "Take this cup, all of you, and drink of it. This shall be the cup of my remembrance. This is the cup of the blessing of a new dispensation of grace and truth. This shall be to you the emblem of the bestowal and ministry of the divine Spirit of Truth. And I will not again drink this cup with you until I drink in new form with you in the Father's eternal kingdom."

179:5.2 The apostles all sensed that something out of the ordinary was transpiring as they drank of this cup of blessing in profound reverence and perfect silence. The old Passover commemorated the emergence of their fathers from a state of racial slavery into individual freedom; now the Master was instituting a new remembrance supper as a symbol of the new dispensation wherein the enslaved individual emerges from the bondage of ceremonialism and selfishness into the spiritual joy of the brotherhood and fellowship of the liberated faith sons of the living God.

179:5.4 In instituting this remembrance supper, the Master, as was always his habit, resorted to parables and symbols. He employed symbols because he wanted to teach certain great spiritual truths in such a manner as to make it difficult for his successors to attach precise interpretations and definite meanings to his words. In this way he sought to prevent successive generations from crystallizing his teaching and binding down his spiritual meanings by the dead chains of tradition and dogma. In the establishment of the only ceremony or sacrament associated with his whole life mission, Jesus took great pains to suggest his meanings rather than to commit himself to precise definitions. He did not wish to destroy the individual's concept of divine communion by establishing a precise form; neither did he desire to limit the believer's spiritual imagination by formally cramping it. He rather sought to set man's reborn soul free upon the joyous wings of a new and living spiritual liberty.

179:5.5 Notwithstanding the Master's effort thus to establish this new sacrament of the remembrance, those who followed after him in the intervening centuries saw to it that his express desire was effectively thwarted in that his simple spiritual symbolism of that last night in the flesh has been reduced to precise interpretations and subjected to the almost mathematical precision of a set formula. Of all Jesus' teachings none have become more tradition-standardized.

179:5.6 This supper of remembrance, when it is partaken of by those who are Son-believing and God-knowing, does not need to have associated with its symbolism any of man's puerile misinterpretations regarding the meaning of the divine presence, for upon all such occasions the Master is really present. The remembrance supper is the believer's symbolic rendezvous with Michael. When you become thus spirit-conscious, the Son is actually present, and his spirit fraternizes with the indwelling fragment of his Father.

179:5.7 After they had engaged in meditation for a few moments, Jesus continued speaking: "When you do these things, recall the life I have lived on earth among you and rejoice that I am to continue to live on earth with you and to serve through you. As individuals, contend not among yourselves as to who shall be greatest. Be you all as brethren. And when the kingdom grows to embrace large groups of believers, likewise should you refrain from contending for greatness or seeking preferment between such groups."

179:5.8 And this mighty occasion took place in the upper chamber of a friend. There was nothing of sacred form or of ceremonial consecration about either the supper or the building. The remembrance supper was established without ecclesiastical sanction.

179:5.9 When Jesus had thus established the supper of the remembrance, he said to the apostles: "And as often as you do this, do it in remembrance of me. And when you do remember me, first look back upon my life in the flesh, recall that I was once with you, and then, by faith, discern that you shall all sometime sup with me in the Father's eternal kingdom. This is the new Passover which I leave with you, even the memory of my bestowal life, the word of eternal truth; and of my love for you, the outpouring of my Spirit of Truth upon all flesh."

179:5.10 And they ended this celebration of the old but bloodless Passover in connection with the inauguration of the new supper of the remembrance, by singing, all together, the one hundred and eighteenth Psalm.