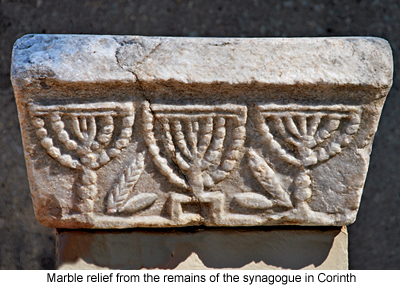 133:3.1 By the time they reached Corinth, Ganid was becoming very much interested in the Jewish religion, and so it was not strange that, one day as they passed the synagogue and saw the people going in, he requested Jesus to take him to the service. That day they heard a learned rabbi discourse on the "Destiny of Israel," and after the service they met one Crispus, the chief ruler of this synagogue. Many times they went back to the synagogue services, but chiefly to meet Crispus. Ganid grew to be very fond of Crispus, his wife, and their family of five children. He much enjoyed observing how a Jew conducted his family life.

133:3.2 While Ganid studied family life, Jesus was teaching Crispus the better ways of religious living. Jesus held more than twenty sessions with this forward-looking Jew; and it is not surprising, years afterward, when Paul was preaching in this very synagogue, and when the Jews had rejected his message and had voted to forbid his further preaching in the synagogue, and when he then went to the gentiles, that Crispus with his entire family embraced the new religion, and that he became one of the chief supports of the Christian church which Paul subsequently organized at Corinth.

133:3.3 During the eighteen months Paul preached in Corinth, being later joined by Silas and Timothy, he met many others who had been taught by the "Jewish tutor of the son of an Indian merchant."