3am Friday Morning - Jesus Before The Court Of Sanhedrists 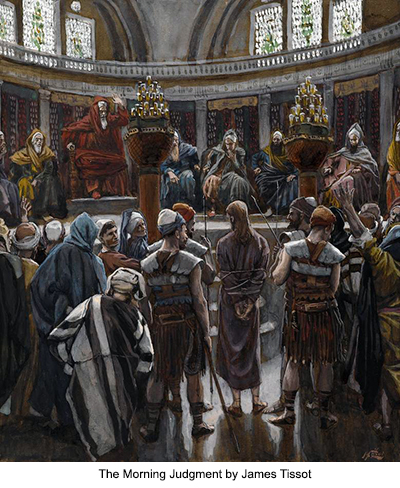 184:3.1 It was about half past three o'clock this Friday morning when the chief priest, Caiaphas, called the Sanhedrist court of inquiry to order and asked that Jesus be brought before them for his formal trial. On three previous occasions the Sanhedrin, by a large majority vote, had decreed the death of Jesus, had decided that he was worthy of death on informal charges of lawbreaking, blasphemy, and flouting the traditions of the fathers of Israel.

184:3.2 This was not a regularly called meeting of the Sanhedrin and was not held in the usual place, the chamber of hewn stone in the temple. This was a special trial court of some thirty Sanhedrists and was convened in the palace of the high priest. John Zebedee was present with Jesus throughout this so-called trial.

184:3.3 How these chief priests, scribes, Sadducees, and some of the Pharisees flattered themselves that Jesus, the disturber of their position and the challenger of their authority, was now securely in their hands! And they were resolved that he should never live to escape their vengeful clutches.

184:3.4 Ordinarily, the Jews, when trying a man on a capital charge, proceeded with great caution and provided every safeguard of fairness in the selection of witnesses and the entire conduct of the trial. But on this occasion, Caiaphas was more of a prosecutor than an unbiased judge.

184:3.5 Jesus appeared before this court clothed in his usual garments and with his hands bound together behind his back. The entire court was startled and somewhat confused by his majestic appearance. Never had they gazed upon such a prisoner nor witnessed such composure in a man on trial for his life.

184:3.6 The Jewish law required that at least two witnesses must agree upon any point before a charge could be laid against the prisoner. Judas could not be used as a witness against Jesus because the Jewish law specifically forbade the testimony of a traitor. More than a score of false witnesses were on hand to testify against Jesus, but their testimony was so contradictory and so evidently trumped up that the Sanhedrists themselves were very much ashamed of the performance. Jesus stood there, looking down benignly upon these perjurers, and his very countenance disconcerted the lying witnesses. Throughout all this false testimony the Master never said a word; he made no reply to their many false accusations.

184:3.7 The first time any two of their witnesses approached even the semblance of an agreement was when two men testified that they had heard Jesus say in the course of one of his temple discourses that he would "destroy this temple made with hands and in three days make another temple without hands." That was not exactly what Jesus said, regardless of the fact that he pointed to his own body when he made the remark referred to.

184:3.8 Although the high priest shouted at Jesus, "Do you not answer any of these charges?" Jesus opened not his mouth. He stood there in silence while all of these false witnesses gave their testimony. Hatred, fanaticism, and unscrupulous exaggeration so characterized the words of these perjurers that their testimony fell in its own entanglements. The very best refutation of their false accusations was the Master's calm and majestic silence.

184:3.9 Shortly after the beginning of the testimony of the false witnesses, Annas arrived and took his seat beside Caiaphas. Annas now arose and argued that this threat of Jesus to destroy the temple was sufficient to warrant three charges against him:

184:3.19 Already had the full Sanhedrin agreed that Jesus was guilty of death-deserving transgressions of the Jewish laws, but they were now more concerned with developing charges regarding his conduct and teachings which would justify Pilate in pronouncing the death sentence upon their prisoner. They knew that they must secure the consent of the Roman governor before Jesus could legally be put to death. And Annas was minded to proceed along the line of making it appear that Jesus was a dangerous teacher to be abroad among the people.

184:3.17 But Caiaphas could not longer endure the sight of the Master standing there in perfect composure and unbroken silence. He thought he knew at least one way in which the prisoner might be induced to speak. Accordingly, he rushed over to the side of Jesus and, shaking his accusing finger in the Master's face, said: "I adjure you, in the name of the living God, that you tell us whether you are the Deliverer, the Son of God." Jesus answered Caiaphas: "I am. Soon I go to the Father, and presently shall the Son of Man be clothed with power and once more reign over the hosts of heaven." 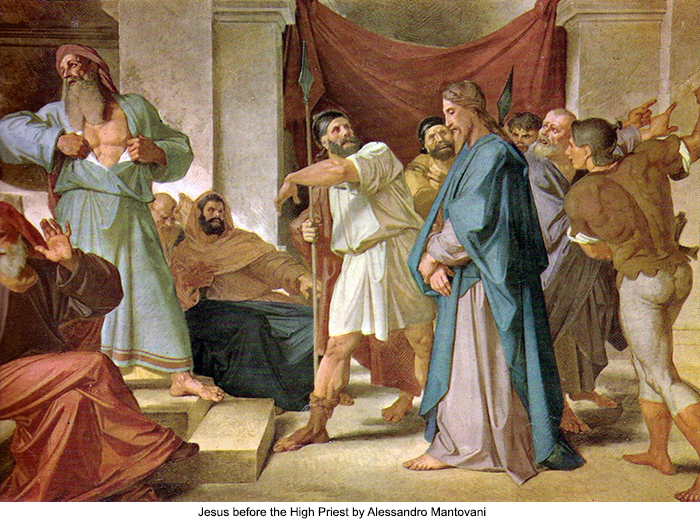 184:3.18 When the high priest heard Jesus utter these words, he was exceedingly angry, and rending his outer garments, he exclaimed: "What further need have we of witnesses? Behold, now have you all heard this man's blasphemy. What do you now think should be done with this lawbreaker and blasphemer?" And they all answered in unison, "He is worthy of death; let him be crucified."

184:3.19 Jesus manifested no interest in any question asked him when before Annas or the Sanhedrists except the one question relative to his bestowal mission. When asked if he were the Son of God, he instantly and unequivocally answered in the affirmative.

184:3.17 Annas desired that the trial proceed further, and that charges of a definite nature regarding Jesus' relation to the Roman law and Roman institutions be formulated for subsequent presentation to Pilate. The councilors were anxious to carry these matters to a speedy termination, not only because it was the preparation day for the Passover and no secular work should be done after noon, but also because they feared Pilate might any time return to the Roman capital of Judea, Caesarea, since he was in Jerusalem only for the Passover celebration.

184:3.18 But Annas did not succeed in keeping control of the court. After Jesus had so unexpectedly answered Caiaphas, the high priest stepped forward and smote him in the face with his hand. Annas was truly shocked as the other members of the court, in passing out of the room, spit in Jesus' face, and many of them mockingly slapped him with the palms of their hands. And thus in disorder and with such unheard-of confusion this first session of the Sanhedrist trial of Jesus ended at half past four o'clock.

184:3.19 Thirty prejudiced and tradition-blinded false judges, with their false witnesses, are presuming to sit in judgment on the righteous Creator of a universe. And these impassioned accusers are exasperated by the majestic silence and superb bearing of this God-man. His silence is terrible to endure; his speech is fearlessly defiant. He is unmoved by their threats and undaunted by their assaults. Man sits in judgment on God, but even then he loves them and would save them if he could.- Back to Great Jesus Stories -