Jesus Asks That His Mother Be Taken From The Scene 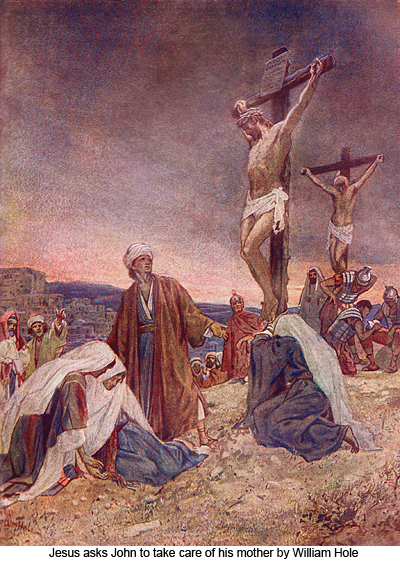 187:4.7 Just after the repentant thief heard the Master's promise that they should sometime meet in Paradise, John returned from the city, bringing with him his mother and a company of almost a dozen women believers. John took up his position near Mary the mother of Jesus, supporting her. Her son Jude stood on the other side. As Jesus looked down upon this scene, it was noontide, and he said to his mother, "Woman, behold your son!" And speaking to John, he said, "My son, behold your mother!" And then he addressed them both, saying, "I desire that you depart from this place." And so John and Jude led Mary away from Golgotha. John took the mother of Jesus to the place where he tarried in Jerusalem and then hastened back to the scene of the crucifixion. After the Passover Mary returned to Bethsaida, where she lived at John's home for the rest of her natural life. Mary did not live quite one year after the death of Jesus.

187:4.8 After Mary left, the other women withdrew for a short distance and remained in attendance upon Jesus until he expired on the cross, and they were yet standing by when the body of the Master was taken down for burial.