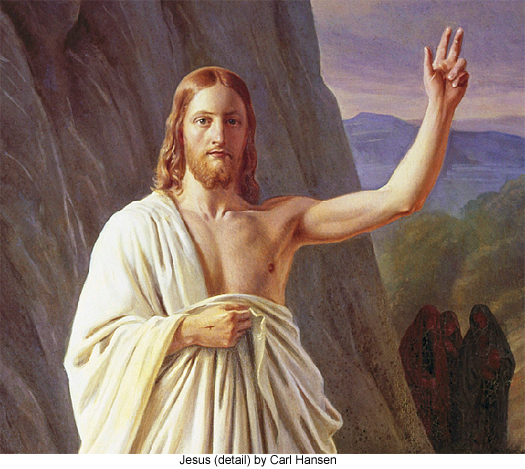 192:4.1 Word of the appearances of Jesus was spreading throughout Galilee, and every day increasing numbers of believers arrived at the Zebedee home to inquire about the Master's resurrection and to find out the truth about these reputed appearances. Peter, early in the week, sent out word that a public meeting would be held by the seaside the next Sabbath at three o'clock in the afternoon.

192:4.2 Accordingly, on Saturday, April 29, at three o'clock, more than five hundred believers from the environs of Capernaum assembled at Bethsaida to hear Peter preach his first public sermon since the resurrection. The apostle was at his best, and after he had finished his appealing discourse, few of his hearers doubted that the Master had risen from the dead.

192:4.3 Peter ended his sermon, saying: "We affirm that Jesus of Nazareth is not dead; we declare that he has risen from the tomb; we proclaim that we have seen him and talked with him." Just as he finished making this declaration of faith, there by his side, in full view of all these people, the Master appeared in morontia form and, speaking to them in familiar accents, said, "Peace be upon you, and my peace I leave with you." When he had thus appeared and had so spoken to them, he vanished from their sight. This was the fifteenth morontia manifestation of the risen Jesus.

192:4.4 Because of certain things said to the eleven while they were in conference with the Master on the mount of ordination, the apostles received the impression that their Master would presently make a public appearance before a group of the Galilean believers , and that, after he had done so, they were to return to Jerusalem. Accordingly, early the next day, Sunday, April 30, the eleven left Bethsaida for Jerusalem. They did considerable teaching and preaching on the way down the Jordan, so that they did not arrive at the home of the Marks in Jerusalem until late on Wednesday, May 3.

192:4.5 This was a sad homecoming for John Mark. Just a few hours before he reached home, his father, Elijah Mark, suddenly died from a hemorrhage in the brain. Although the thought of the certainty of the resurrection of the dead did much to comfort the apostles in their grief, at the same time they truly mourned the loss of their good friend, who had been their stanch supporter even in the times of great trouble and disappointment. John Mark did all he could to comfort his mother and, speaking for her, invited the apostles to continue to make their home at her house. And the eleven made this upper chamber their headquarters until after the day of Pentecost.

192:4.6 The apostles had purposely entered Jerusalem after nightfall that they might not be seen by the Jewish authorities. Neither did they publicly appear in connection with the funeral of Elijah Mark. All the next day they remained in quiet seclusion in this eventful upper chamber.

192:4.7 On Thursday night the apostles had a wonderful meeting in this upper chamber and all pledged themselves to go forth in the public preaching of the new gospel of the risen Lord except Thomas Simon Zelotes, and the Alpheus twins. Already had begun the first steps of changing the gospel of the kingdom—sonship with God and brotherhood with man—into the proclamation of the resurrection of Jesus. Nathaniel opposed this shift in the burden of their public message, but he could not withstand Peter's eloquence, neither could he overcome the enthusiasm of the disciples, especially the women believers.

192:4.8 And so, under the vigorous leadership of Peter and ere the Master ascended to the Father, his well-meaning representatives began that subtle process of gradually and certainly changing the religion of Jesus into a new and modified form of religion about Jesus.