Jesus And The Apostles On The Mount Of Ordination (14th) 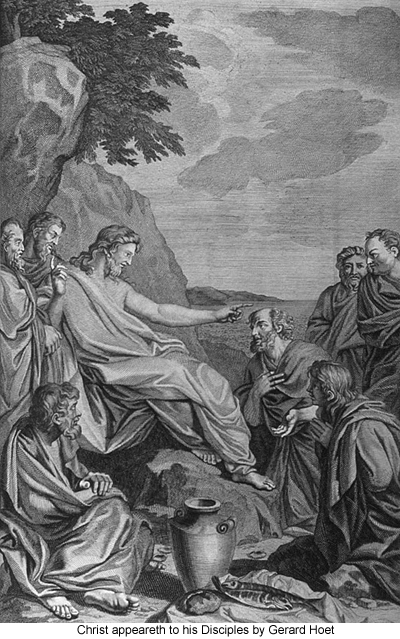 192:3.1 At noon on Saturday, April 22, the eleven apostles assembled by appointment on the hill near Capernaum, and Jesus appeared among them. This meeting occurred on the very mount where the Master had set them apart as his apostles and as ambassadors of the Father's kingdom on earth. And this was the Master's fourteenth morontia manifestation.

192:3.2 At this time the eleven apostles knelt in a circle about the Master and heard him repeat the charges and saw him re-enact the ordination scene even as when they were first set apart for the special work of the kingdom. And all of this was to them as a memory of their former consecration to the Father's service, except the Master's prayer. When the Master—the morontia Jesus—now prayed, it was in tones of majesty and with words of power such as the apostles had never before heard. Their Master now spoke with the rulers of the universes as one who, in his own universe, had had all power and authority committed to his hand. And these eleven men never forgot this experience of the morontia rededication to the former pledges of ambassadorship. The Master spent just one hour on this mount with his ambassadors, and when he had taken an affectionate farewell of them, he vanished from their sight.