Jesus And The Alexandrian Jews – Another Job Offer Refused 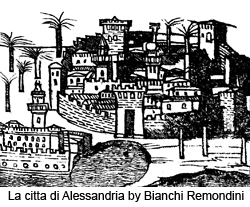 This was Jesus' first year of comparative freedom from family responsibility. James was very successful in managing the home with Jesus' help in counsel and finances.

128:5.2 The week following the Passover of this year a young man from Alexandria came down to Nazareth to arrange for a meeting, later in the year, between Jesus and a group of Alexandrian Jews at some point on the Palestinian coast. This conference was set for the middle of June, and Jesus went over to Caesarea to meet with five prominent Jews of Alexandria, who besought him to establish himself in their city as a religious teacher, offering as an inducement to begin with, the position of assistant to the chazan in their chief synagogue.

128:5.3 The spokesmen for this committee explained to Jesus that Alexandria was destined to become the headquarters of Jewish culture for the entire world; that the Hellenistic trend of Jewish affairs had virtually outdistanced the Babylonian school of thought. They reminded Jesus of the ominous rumblings of rebellion in Jerusalem and throughout Palestine and assured him that any uprising of the Palestinian Jews would be equivalent to national suicide, that the iron hand of Rome would crush the rebellion in three months, and that Jerusalem would be destroyed and the temple demolished, that not one stone would be left upon another.

128:5.4 Jesus listened to all they had to say, thanked them for their confidence, and, in declining to go to Alexandria, in substance said, "My hour has not yet come." They were nonplused by his apparent indifference to the honor they had sought to confer upon him. Before taking leave of Jesus, they presented him with a purse in token of the esteem of his Alexandrian friends and in compensation for the time and expense of coming over to Caesarea to confer with them. But he likewise refused the money, saying: "The house of Joseph has never received alms, and we cannot eat another's bread as long as I have strong arms and my brothers can labor."

128:5.5 His friends from Egypt set sail for home, and in subsequent years, when they heard rumors of the Capernaum boatbuilder who was creating such a commotion in Palestine, few of them surmised that he was the babe of Bethlehem grown up and the same strange-acting Galilean who had so unceremoniously declined the invitation to become a great teacher in Alexandria.