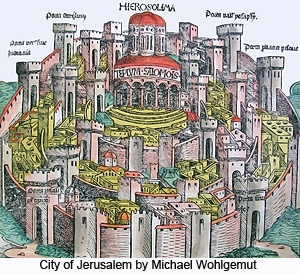 128:6.3 The family finances were in the best condition since the disappearance of Joseph's estate. The final payments had been made on the caravan repair shop; they owed no man and for the first time in years had some funds ahead. This being true, and since he had taken his other brothers to Jerusalem for their first Passover ceremonies, Jesus decided to accompany Jude (who had just graduated from the synagogue school) on his first visit to the temple.

128:6.4 They went up to Jerusalem and returned by the same route, the Jordan valley, as Jesus feared trouble if he took his young brother through Samaria. Already at Nazareth Jude had got into slight trouble several times because of his hasty disposition, coupled with his strong patriotic sentiments.

128:6.5 They arrived at Jerusalem in due time and were on their way for a first visit to the temple, the very sight of which had stirred and thrilled Jude to the very depths of his soul, when they chanced to meet Lazarus of Bethany. While Jesus talked with Lazarus and sought to arrange for their joint celebration of the Passover, Jude started up real trouble for them all. Close at hand stood a Roman guard who made some improper remarks regarding a Jewish girl who was passing. Jude flushed with fiery indignation and was not slow in expressing his resentment of such an impropriety directly to and within hearing of the soldier. Now the Roman legionnaires were very sensitive to anything bordering on Jewish disrespect; so the guard promptly placed Jude under arrest. This was too much for the young patriot, and before Jesus could caution him by a warning glance, he had delivered himself of a voluble denunciation of pent-up anti-Roman feelings, all of which only made a bad matter worse. Jude, with Jesus by his side, was taken at once to the military prison. 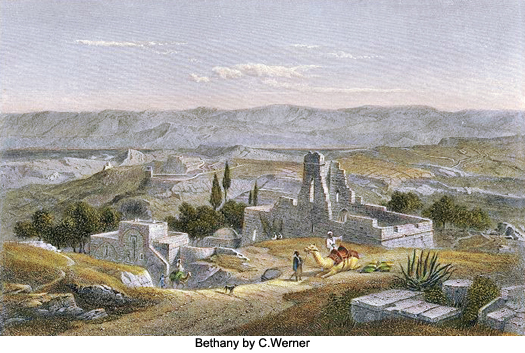 128:6.6 Jesus endeavored to obtain either an immediate hearing for Jude or else his release in time for the Passover celebration that evening, but he failed in these attempts. Since the next day was a "holy convocation" in Jerusalem, even the Romans would not presume to hear charges against a Jew. Accordingly, Jude remained in confinement until the morning of the second day after his arrest, and Jesus stayed at the prison with him. They were not present in the temple at the ceremony of receiving the sons of the law into the full citizenship of Israel. Jude did not pass through this formal ceremony for several years, until he was next in Jerusalem at a Passover and in connection with his propaganda work in behalf of the Zealots, the patriotic organization to which he belonged and in which he was very active.

128:6.7 The morning following their second day in prison Jesus appeared before the military magistrate in behalf of Jude. By making apologies for his brother's youth and by a further explanatory but judicious statement with reference to the provocative nature of the episode which had led up to the arrest of his brother, Jesus so handled the case that the magistrate expressed the opinion that the young Jew might have had some possible excuse for his violent outburst. After warning Jude not to allow himself again to be guilty of such rashness, he said to Jesus in dismissing them: "You had better keep your eye on the lad; he's liable to make a lot of trouble for all of you." And the Roman judge spoke the truth. Jude did make considerable trouble for Jesus, and always was the trouble of this same nature-clashes with the civil authorities because of his thoughtless and unwise patriotic outbursts.

128:6.8 Jesus and Jude walked over to Bethany for the night, explaining why they had failed to keep their appointment for the Passover supper, and set out for Nazareth the following day. Jesus did not tell the family about his young brother's arrest at Jerusalem, but he had a long talk with Jude about this episode some three weeks after their return. After this talk with Jesus Jude himself told the family. He never forgot the patience and forbearance his brother-father manifested throughout the whole of this trying experience.