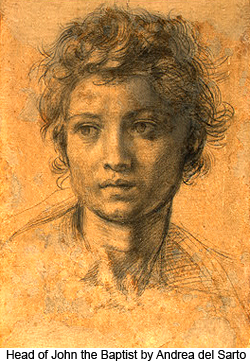 127:3.11 In September, Elizabeth and John came to visit the Nazareth family. John, having lost his father, intended to return to the Judean hills to engage in agriculture and sheep raising unless Jesus advised him to remain in Nazareth to take up carpentry or some other line of work. They did not know that the Nazareth family was practically penniless. The more Mary and Elizabeth talked about their sons, the more they became convinced that it would be good for the two young men to work together and see more of each other.

127:3.12 Jesus and John had many talks together; and they talked over some very intimate and personal matters. When they had finished this visit, they decided not again to see each other until they should meet in their public service after "the heavenly Father should call" them to their work. John was tremendously impressed by what he saw at Nazareth that he should return home and labor for the support of his mother. He became convinced that he was to be a part of Jesus' life mission, but he saw that Jesus was to occupy many years with the rearing of his family; so he was much more content to return to his home and settle down to the care of their little farm and to minister to the needs of his mother. And never again did John and Jesus see each other until that day by the Jordan when the Son of Man presented himself for baptism.