In The Darkness Of The Sandstorm - After The Crucifixion 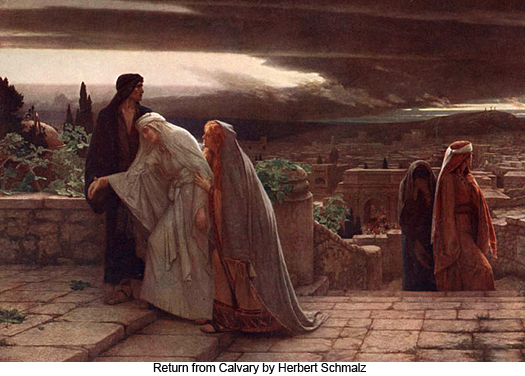 187:6.1 In the midst of the darkness of the sandstorm, about half past three o'clock, David Zebedee sent out the last of the messengers carrying the news of the Master's death. The last of his runners he dispatched to the home of Martha and Mary in Bethany, where he supposed the mother of Jesus stopped with the rest of her family.

187:6.2 After the death of the Master, John sent the women, in the charge of Jude, to the home of Elijah Mark, where they tarried over the Sabbath day. John himself, being well known by this time to the Roman centurion, remained at Golgotha until Joseph and Nicodemus arrived on the scene with an order from Pilate authorizing them to take possession of the body of Jesus.

187:6.3 Thus ended a day of tragedy and sorrow for a vast universe whose myriads of intelligences had shuddered at the shocking spectacle of the crucifixion of the human incarnation of their beloved Sovereign; they were stunned by this exhibition of mortal callousness and human perversity.