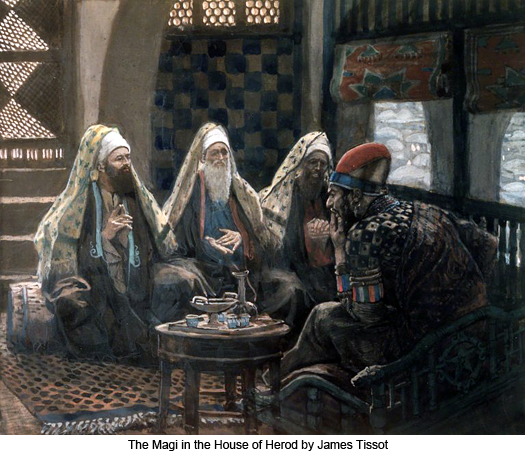 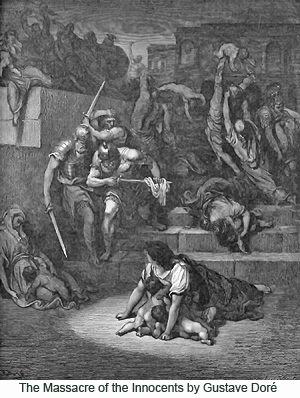 122:10.1 But the watchers for Herod were not inactive. When they reported to him the visit of the priests of Ur to Bethlehem, Herod summoned these Chaldeans to appear before him. He inquired diligently of these wise men about the new "king of the Jews," but they gave him little satisfaction, explaining that the babe had been born of a woman who had come down to Bethlehem with her husband for the census enrollment. Herod, not being satisfied with this answer, sent them forth with a purse and directed that they should find the child so that he too might come and worship him, since they had declared that his kingdom was to be spiritual, not temporal. But when the wise men did not return, Herod grew suspicious. As he turned these things over in his mind, his informers returned and made full report of the recent occurrences in the temple, bringing him a copy of parts of the Simeon song which had been sung at the redemption ceremonies of Jesus. But they had failed to follow Joseph and Mary, and Herod was very angry with them when they could not tell him whither the pair had taken the babe. He then dispatched searchers to locate Joseph and Mary. Knowing Herod pursued the Nazareth family, Zacharias and Elizabeth remained away from Bethlehem. The boy baby was secreted with Joseph's relatives.

122:10.2 Joseph was afraid to seek work, and their small savings were rapidly disappearing. Even at the time of the purification ceremonies at the temple, Joseph deemed himself sufficiently poor to warrant his offering for Mary two young pigeons as Moses had directed for the purification of mothers among the poor.

122:10.3 When, after more than a year of searching, Herod's spies had not located Jesus, and because of the suspicion that the babe was still concealed in Bethlehem, he prepared an order directing that a systematic search be made of every house in Bethlehem, and that all boy babies under two years of age should be killed. In this manner Herod hoped to make sure that this child who was to become "king of the Jews" would be destroyed. And thus perished in one day sixteen boy babies in Bethlehem of Judea. But intrigue and murder, even in his own immediate family, were common occurrences at the court of Herod. 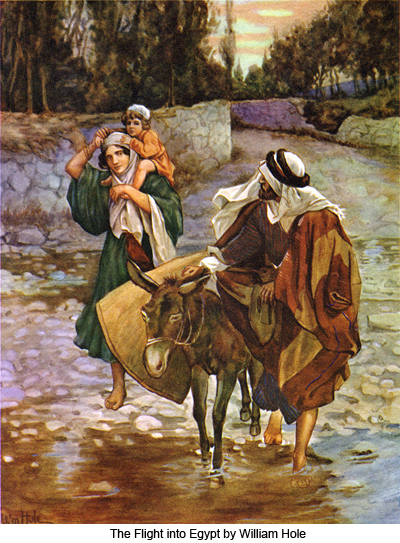 122:10.4 The massacre of these infants took place about the middle of October, 6 B.C., when Jesus was a little over one year of age. But there were believers in the coming Messiah even among Herod's court attachés, and one of these, learning of the order to slaughter the Bethlehem boy babies, communicated with Zacharias, who in turn dispatched a messenger to Joseph; and the night before the massacre Joseph and Mary departed from Bethlehem with the babe for Alexandria in Egypt. In order to avoid attracting attention, they journeyed alone to Egypt with Jesus. They went to Alexandria on funds provided by Zacharias, and there Joseph worked at his trade while Mary and Jesus lodged with well-to-do relatives of Joseph's family. They sojourned in Alexandria two full years, not returning to Bethlehem until after the death of Herod.