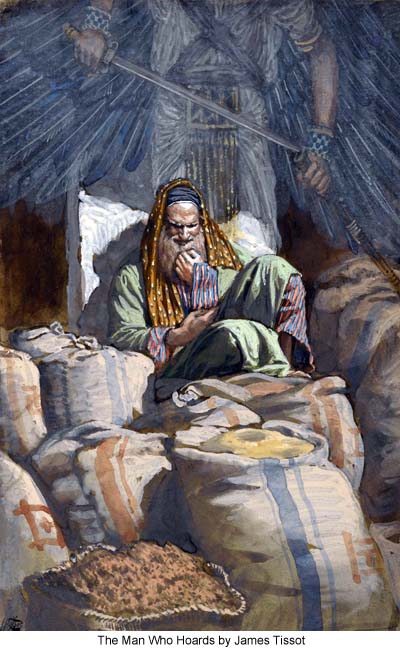 165:4.1 As the apostles baptized believers, the Master talked with those who tarried. And a certain young man said to him: "Master, my father died leaving much property to me and my brother, but my brother refuses to give me that which is my own. Will you, then, bid my brother divide this inheritance with me?" Jesus was mildly indignant that this material-minded youth should bring up for discussion such a question of business; but he proceeded to use the occasion for the impartation of further instruction. Said Jesus: "Man, who made me a divider over you? Where did you get the idea that I give attention to the material affairs of this world?" And then, turning to all who were about him, he said: "Take heed and keep yourselves free from covetousness; a man's life consists not in the abundance of the things which he may possess. Happiness comes not from the power of wealth, and joy springs not from riches. Wealth, in itself, is not a curse, but the love of riches many times leads to such devotion to the things of this world that the soul becomes blinded to the beautiful attractions of the spiritual realities of the kingdom of God on earth and to the joys of eternal life in heaven.

165:4.2 "Let me tell you a story of a certain rich man whose ground brought forth plentifully; and when he had become very rich, he began to reason with himself, saying: 'What shall I do with all my riches? I now have so much that I have no place to store my wealth.' And when he had meditated on his problem, he said: 'This I will do; I will pull down my barns and build greater ones, and thus will I have abundant room in which to store my fruits and my goods. Then can I say to my soul, soul, you have much wealth laid up for many years; take now your ease; eat, drink, and be merry, for you are rich and increased in goods.'

165:4.3 "But this rich man was also foolish. In providing for the material requirements of his mind and body, he had failed to lay up treasures in heaven for the satisfaction of the spirit and for the salvation of the soul. And even then he was not to enjoy the pleasure of consuming his hoarded wealth, for that very night was his soul required of him. That night there came the brigands who broke into his house to kill him, and after they had plundered his barns, they burned that which remained. And for the property which escaped the robbers his heirs fell to fighting among themselves. This man laid up treasures for himself on earth, but he was not rich toward God."

165:4.4 Jesus thus dealt with the young man and his inheritance because he knew that his trouble was covetousness. Even if this had not been the case, the Master would not have interfered, for he never meddled with the temporal affairs of even his apostles, much less his disciples.

165:4.5 When Jesus had finished his story, another man rose up and asked him: "Master, I know that your apostles have sold all their earthly possessions to follow you, and that they have all things in common as do the Essenes, but would you have all of us who are your disciples do likewise? Is it a sin to possess honest wealth?" And Jesus replied to this question: "My friend, it is not a sin to have honorable wealth; but it is a sin if you convert the wealth of material possessions into treasures which may absorb your interests and divert your affections from devotion to the spiritual pursuits of the kingdom. There is no sin in having honest possessions on earth provided your treasure is in heaven, for where your treasure is there will your heart be also. There is a great difference between wealth which leads to covetousness and selfishness and that which is held and dispensed in the spirit of stewardship by those who have an abundance of this world's goods, and who so bountifully contribute to the support of those who devote all their energies to the work of the kingdom. Many of you who are here and without money are fed and lodged in yonder tented city because liberal men and women of means have given funds to your host, David Zebedee, for such purposes.

165:4.6 "But never forget that, after all, wealth is unenduring. The love of riches all too often obscures and even destroys the spiritual vision. Fail not to recognize the danger of wealth's becoming, not your servant, but your master."

165:4.7 Jesus did not teach nor countenance improvidence, idleness, indifference to providing the physical necessities for one's family, or dependence upon alms. But he did teach that the material and temporal must be subordinated to the welfare of the soul and the progress of the spiritual nature in the kingdom of heaven.

165:4.8 Then, as the people went down by the river to witness the baptizing, the first man came privately to Jesus about his inheritance inasmuch as he thought Jesus had dealt harshly with him; and when the Master had again heard him, he replied: "My son, why do you miss the opportunity to feed upon the bread of life on a day like this in order to indulge your covetous disposition? Do you not know that the Jewish laws of inheritance will be justly administered if you will go with your complaint to the court of the synagogue? Can you not see that my work has to do with making sure that you know about your heavenly inheritance? Have you not read the Scripture: 'There is he who waxes rich by his wariness and much pinching, and this is the portion of his reward: Whereas he says, I have found rest and now shall be able to eat continually of my goods, yet he knows not what time shall bring upon him, and also that he must leave all these things to others when he dies.' Have you not read the commandment: 'You shall not covet.' And again, 'They have eaten and filled themselves and waxed fat, and then did they turn to other gods.' Have you read in the Psalms that 'the Lord abhors the covetous,' and that 'the little a righteous man has is better than the riches of many wicked.' 'If riches increase, set not your heart upon them.' Have you read where Jeremiah said, 'Let not the rich man glory in his riches'; and Ezekiel spoke truth when he said, 'With their mouths they make a show of love, but their hearts are set upon their own selfish gain.'"

165:4.9 Jesus sent the young man away, saying to him, "My son, what shall it profit you if you gain the whole world and lose your own soul?"

165:4.10 To another standing near by who asked Jesus how the wealthy would stand in the day of judgment, he replied: "I have come to judge neither the rich nor the poor, but the lives men live will sit in judgment on all. Whatever else may concern the wealthy in the judgment, at least three questions must be answered by all who acquire great wealth, and these questions are:

165:4.14 Then Jesus went into his tent to rest for a while before the evening meal. When the apostles had finished with the baptizing, they came also and would have talked with him about wealth on earth and treasure in heaven, but he was asleep.