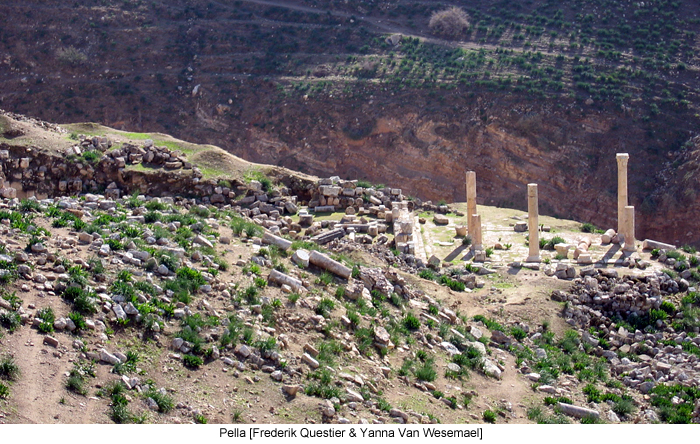 163:5.1 Jesus and the twelve now prepared to establish their last headquarters in Perea, near Pella, where the Master was baptized in the Jordan. The last ten days of November were spent in council at Magadan, and on Tuesday, December 6, the entire company of almost three hundred started out at daybreak with all their effects to lodge that night near Pella by the river. This was the same site, by the spring, that John the Baptist had occupied with his camp several years before.

163:5.2 After the breaking up of the Magadan Camp, David Zebedee returned to Bethsaida and began immediately to curtail the messenger service. The kingdom was taking on a new phase. Daily, pilgrims arrived from all parts of Palestine and even from remote regions of the Roman Empire. Believers occasionally came from Mesopotamia and from the lands east of the Tigris. Accordingly, on Sunday, December 18, David, with the help of his messenger corps, loaded on to the pack animals the camp equipage, then stored in his father's house, with which he had formerly conducted the camp of Bethsaida by the lake. Bidding farewell to Bethsaida for the time being, he proceeded down the lake shore and along the Jordan to a point about one-half mile north of the apostolic camp; and in less than a week he was prepared to offer hospitality to almost fifteen hundred pilgrim visitors. The apostolic camp could accommodate about five hundred. This was the rainy season in Palestine, and these accommodations were required to take care of the ever-increasing number of inquirers, mostly earnest, who came into Perea to see Jesus and to hear his teaching.

163:5.3 David did all this on his own initiative, though he had taken counsel with Philip and Matthew at Magadan. He employed the larger part of his former messenger corps as his helpers in conducting this camp; he now used less than twenty men on regular messenger duty. Near the end of December and before the return of the seventy, almost eight hundred visitors were gathered about the Master, and they found lodging in David's camp.

165:1.1 By the middle of January more than twelve hundred persons were gathered together at Pella, and Jesus taught this multitude at least once each day when he was in residence at the camp, usually speaking at nine o'clock in the morning if not prevented by rain. Peter and the other apostles taught each afternoon. The evenings Jesus reserved for the usual sessions of questions and answers with the twelve and other advanced disciples. The evening groups averaged about fifty.

165:1.2 By the middle of March, the time when Jesus began his journey toward Jerusalem, over four thousand persons composed the large audience which heard Jesus or Peter preach each morning. The Master chose to terminate his work on earth when the interest in his message had reached a high point, the highest point attained under this second or nonmiraculous phase of the progress of the kingdom. While three quarters of the multitude were truth seekers, there were also present a large number of Pharisees from Jerusalem and elsewhere, together with many doubters and cavilers.

165:1.3 Jesus and the twelve apostles devoted much of their time to the multitude assembled at the Pella camp. The twelve paid little or no attention to the field work, only going out with Jesus to visit Abner's associates from time to time. Abner was very familiar with the Perean district since this was the field in which his former master, John the Baptist, had done most of his work. After beginning the Perean mission, Abner and the seventy never returned to the Pella camp.