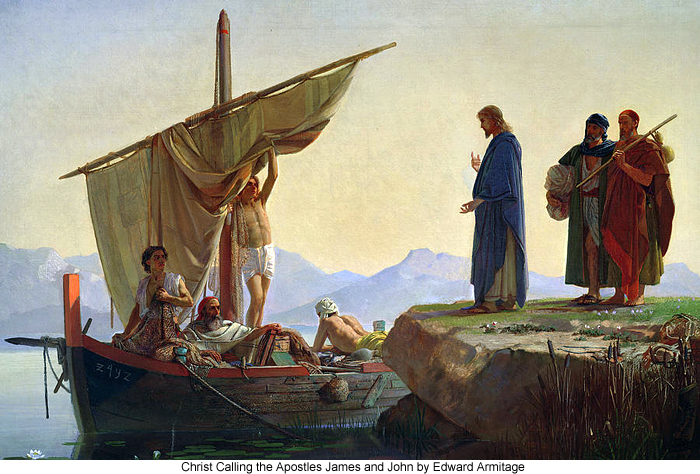 137:1.5 After Jesus had returned to Pella for the night, and while Andrew and Simon were yet discussing the nature of their service in the establishment of the forthcoming kingdom, James and John the sons of Zebedee arrived upon the scene, having just returned from their long and futile searching in the hills for Jesus. When they heard Simon Peter tell how he and his brother, Andrew, had become the first accepted counselors of the new kingdom, and that they were to leave with their new Master on the morrow for Galilee, both James and John were sad. They had known Jesus for some time, and they loved him. They had searched for him many days in the hills, and now they returned to learn that others had been preferred before them. They inquired where Jesus had gone and made haste to find him.

137:1.6 Jesus was asleep when they reached his abode, but they awakened him, saying: "How is it that, while we who have so long lived with you are searching in the hills for you, you prefer others before us and choose Andrew and Simon as your first associates in the new kingdom?" Jesus answered them, "Be calm in your hearts and ask yourselves, `who directed that you should search for the Son of Man when he was about his Father's business?'"After they had recited the details of their long search in the hills, Jesus further instructed them: "You should learn to search for the secret of the new kingdom in your hearts and not in the hills. That which you sought was already present in your souls. You are indeed my brethren—you needed not to be received by me—already were you of the kingdom, and you should be of good cheer, making ready also to go with us tomorrow into Galilee." John then made bold to ask, "But, Master, will James and I be associates with you in the new kingdom, even as Andrew and Simon?" And Jesus, laying a hand on the shoulder of each of them, said: "My brethren, you were already with me in the spirit of the kingdom, even before these others made request to be received. You, my brethren, have no need to make request for entrance into the kingdom; you have been with me in the kingdom from the beginning. Before men, others may take precedence over you, but in my heart did I also number you in the councils of the kingdom, even before you thought to make this request of me. And even so might you have been first before men had you not been absent engaged in a well-intentioned but self-appointed task of seeking for one who was not lost. In the coming kingdom, be not mindful of those things which foster your anxiety but rather at all times concern yourselves only with doing the will of the Father who is in heaven."

137:1.7 James and John received the rebuke in good grace; never more were they envious of Andrew and Simon. And they made ready, with their two associate apostles, to depart for Galilee the next morning. From this day on the term apostle was employed to distinguish the chosen family of Jesus' advisers from the vast multitude of believing disciples who subsequently followed him.

137:1.8 Late that evening, James, John, Andrew, and Simon held converse with John the Baptist, and with tearful eye but steady voice the stalwart Judean prophet surrendered two of his leading disciples to become the apostles of the Galilean Prince of the coming kingdom.