Back In Nazareth (Age 3) 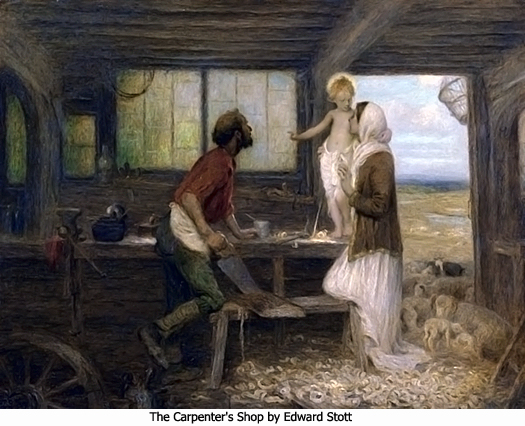 123:1.1 On the fourth day of the journey the party reached its destination in safety. They arrived unannounced at the Nazareth home, which had been occupied for more than three years by one of Joseph's married brothers, who was indeed surprised to see them; so quietly had they gone about their business that neither the family of Joseph nor that of Mary knew they had even left Alexandria. The next day Joseph's brother moved his family, and Mary, for the first time since Jesus' birth, settled down with her little family to enjoy life in their own home. In less than a week Joseph secured work as a carpenter, and they were supremely happy.

123:1.2 Jesus was about three years and two months old at the time of their return to Nazareth. He had stood all these travels very well and was in excellent health and full of childish glee and excitement at having premises of his own to run about in and to enjoy. But he greatly missed the association of his Alexandrian playmates.

123:1.3 On the way to Nazareth Joseph had persuaded Mary that it would be unwise to spread the word among their Galilean friends and relatives that Jesus was a child of promise. They agreed to refrain from all mention of these matters to anyone. And they were both very faithful in keeping this promise.

123:1.4 Jesus' entire fourth year was a period of normal physical development and of unusual mental activity. Meantime he had formed a very close attachment for a neighbor boy about his own age named Jacob. Jesus and Jacob were always happy in their play, and they grew up to be great friends and loyal companions.

123:1.6 It was midsummer of this same year that Joseph built a small workshop close to the village spring and near the caravan tarrying lot. After this he did very little carpenter work by the day. He had as associates two of his brothers and several other mechanics, whom he sent out to work while he remained at the shop making yokes and plows and doing other woodwork. He also did some work in leather and with rope and canvas. And Jesus, as he grew up, when not at school, spent his time about equally between helping his mother with home duties and watching his father work at the shop, meanwhile listening to the conversation and gossip of the caravan conductors and passengers from the four corners of the earth.

123:1.7 In July of this year, one month before Jesus was four years old, an outbreak of malignant intestinal trouble spread over all Nazareth from contact with the caravan travelers. Mary became so alarmed by the danger of Jesus being exposed to this epidemic of disease that she bundled up both her children and fled to the country home of her brother, several miles south of Nazareth on the Megiddo road near Sarid. They did not return to Nazareth for more than two months; Jesus greatly enjoyed this, his first experience on a farm.