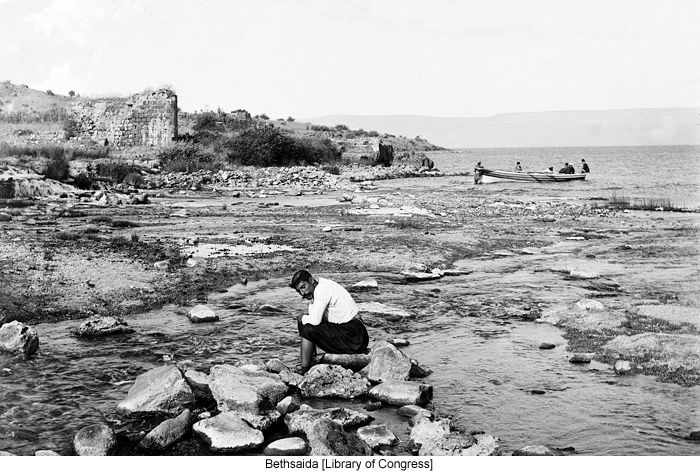 ON FRIDAY EVENING, the day of their arrival at Bethsaida, and on Sabbath morning, the apostles noticed that Jesus was seriously occupied with some momentous problem; they were cognizant that the Master was giving unusual thought to some important matter. He ate no breakfast and but little at noontide. All of Sabbath morning and the evening before, the twelve and their associates were gathered together in small groups about the house, in the garden, and along the seashore. There was a tension of uncertainty and a suspense of apprehension resting upon all of them. Jesus had said little to them since they left Jerusalem.

153:0.2 Not in months had they seen the Master so preoccupied and uncommunicative. Even Simon Peter was depressed, if not downcast. Andrew was at a loss to know what to do for his dejected associates. Nathaniel said they were in the midst of the "lull before the storm." Thomas expressed the opinion that "something out of the ordinary is about to happen." Philip advised David Zebedee to "forget about plans for feeding and lodging the multitude until we know what the Master is thinking about." Matthew was putting forth renewed efforts to replenish the treasury. James and John talked over the forthcoming sermon in the synagogue and speculated much as to its probable nature and scope. Simon Zelotes expressed the belief, in reality a hope, that "the Father in heaven may be about to intervene in some unexpected manner for the vindication and support of his Son," while Judas Iscariot dared to indulge the thought that possibly Jesus was oppressed with regrets that "he did not have the courage and daring to permit the five thousand to proclaim him king of the Jews."

153:0.3 It was from among such a group of depressed and disconsolate followers that Jesus went forth on this beautiful Sabbath afternoon to preach his epoch-making sermon in the Capernaum synagogue. The only word of cheerful greeting or well-wishing from any of his immediate followers came from one of the unsuspecting Alpheus twins, who, as Jesus left the house on his way to the synagogue, saluted him cheerily and said: "We pray the Father will help you, and that we may have bigger multitudes than ever."