An Attempted Healing By Simon 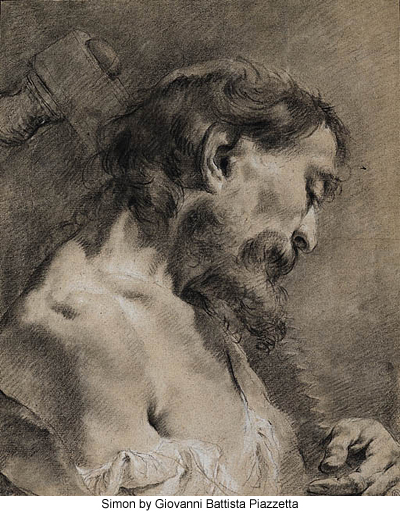 158:4.1 It was shortly before breakfast time on this Tuesday morning when Jesus and his companions arrived at the apostolic camp. As they drew near, they discerned a considerable crowd gathered around the apostles and soon began to hear the loud words of argument and disputation of this group of about fifty persons, embracing the nine apostles and a gathering equally divided between Jerusalem scribes and believing disciples who had tracked Jesus and his associates in their journey from Magadan.

158:4.2 Although the crowd engaged in numerous arguments, the chief controversy was about a certain citizen of Tiberias who had arrived the preceding day in quest of Jesus. This man, James of Safed, had a son about fourteen years old, an only child, who was severely afflicted with epilepsy. In addition to this nervous malady this lad had become possessed by one of those wandering, mischievous, and rebellious midwayers who were then present on earth and uncontrolled, so that the youth was both epileptic and demon-possessed.

158:4.3 For almost two weeks this anxious father, a minor official of Herod Antipas, had wandered about through the western borders of Philip's domains, seeking Jesus that he might entreat him to cure this afflicted son. And he did not catch up with the apostolic party until about noon of this day when Jesus was up on the mountain with the three apostles.

158:4.4 The nine apostles were much surprised and considerably perturbed when this man, accompanied by almost forty other persons who were looking for Jesus, suddenly came upon them. At the time of the arrival of this group the nine apostles, at least the majority of them, had succumbed to their old temptation—that of discussing who should be greatest in the coming kingdom; they were busily arguing about the probable positions which would be assigned the individual apostles. They simply could not free themselves entirely from the long-cherished idea of the material mission of the Messiah. And now that Jesus himself had accepted their confession that he was indeed the Deliverer—at least he had admitted the fact of his divinity—what was more natural than that, during this period of separation from the Master, they should fall to talking about those hopes and ambitions which were uppermost in their hearts. And they were engaged in these discussions when James of Safed and his fellow seekers after Jesus came upon them.

158:4.5 Andrew stepped up to greet this father and his son, saying, "Whom do you seek?" Said James: "My good man, I search for your Master. I seek healing for my afflicted son. I would have Jesus cast out this devil that possesses my child." And then the father proceeded to relate to the apostles how his son was so afflicted that he had many times almost lost his life as a result of these malignant seizures.

158:4.6 As the apostles listened, Simon Zelotes and Judas Iscariot stepped into the presence of the father, saying: "We can heal him; you need not wait for the Master's return. We are ambassadors of the kingdom; no longer do we hold these things in secret. Jesus is the Deliverer, and the keys of the kingdom have been delivered to us." By this time Andrew and Thomas were in consultation at one side. Nathaniel and the others looked on in amazement; they were all aghast at the sudden boldness, if not presumption, of Simon and Judas. Then said the father: "If it has been given you to do these works, I pray that you will speak those words which will deliver my child from this bondage." Then Simon stepped forward and, placing his hand on the head of the child, looked directly into his eyes and commanded: "Come out of him, you unclean spirit; in the name of Jesus obey me." But the lad had only a more violent fit, while the scribes mocked the apostles in derision, and the disappointed believers suffered the taunts of these unfriendly critics.

158:4.7 Andrew was deeply chagrined at this ill-advised effort and its dismal failure. He called the apostles aside for conference and prayer. After this season of meditation, feeling keenly the sting of their defeat and sensing the humiliation resting upon all of them, Andrew sought, in a second attempt, to cast out the demon, but only failure crowned his efforts. Andrew frankly confessed defeat and requested the father to remain with them overnight or until Jesus' return, saying: "Perhaps this sort goes not out except by the Master's personal command."

158:4.8 And so, while Jesus was descending the mountain with the exuberant and ecstatic Peter, James, and John, their nine brethren likewise were sleepless in their confusion and downcast humiliation. They were a dejected and chastened group. But James of Safed would not give up. Although they could give him no idea as to when Jesus might return, he decided to stay on until the Master came back.