After The Resurrection Of Lazarus - The Sanhedrin Debate Jesus' Fate 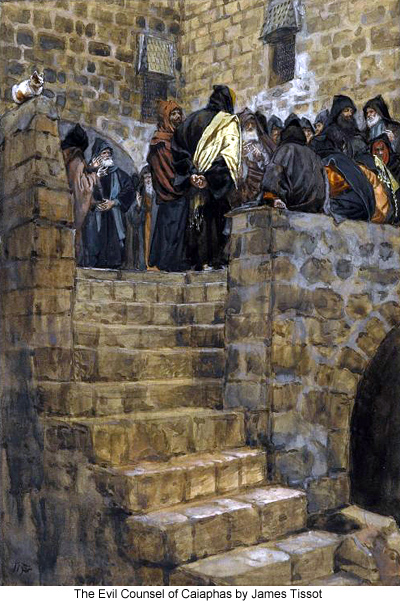 168:3.2 At one o'clock the next day, Friday, the Sanhedrin met to deliberate further on the question, "What shall we do with Jesus of Nazareth?" After more than two hours of discussion and acrimonious debate, a certain Pharisee presented a resolution calling for Jesus' immediate death, proclaiming that he was a menace to all Israel and formally committing the Sanhedrin to the decision of death, without trial and in defiance of all precedent.

168:3.3 Time and again had this august body of Jewish leaders decreed that Jesus be apprehended and brought to trial on charges of blasphemy and numerous other accusations of flouting the Jewish sacred law. They had once before even gone so far as to declare he should die, but this was the first time the Sanhedrin had gone on record as desiring to decree his death in advance of a trial. But this resolution did not come to a vote since fourteen members of the Sanhedrin resigned in a body when such an unheard-of action was proposed. While these resignations were not formally acted upon for almost two weeks, this group of fourteen withdrew from the Sanhedrin on that day, never again to sit in the council. When these resignations were subsequently acted upon, five other members were thrown out because their associates believed they entertained friendly feelings toward Jesus. With the ejection of these nineteen men the Sanhedrin was in a position to try and to condemn Jesus with a solidarity bordering on unanimity.

168:3.4 The following week Lazarus and his sisters were summoned to appear before the Sanhedrin. When their testimony had been heard, no doubt could be entertained that Lazarus had been raised from the dead. Though the transactions of the Sanhedrin virtually admitted the resurrection of Lazarus, the record carried a resolution attributing this and all other wonders worked by Jesus to the power of the prince of devils, with whom Jesus was declared to be in league.

168:3.5 No matter what the source of his wonder-working power, these Jewish leaders were persuaded that, if he were not immediately stopped, very soon all the common people would believe in him; and further, that serious complications with the Roman authorities would arise since so many of his believers regarded him as the Messiah, Israel's deliverer.

168:3.6 It was at this same meeting of the Sanhedrin that Caiaphas the high priest first gave expression to that old Jewish adage, which he so many times repeated: "It is better that one man die, than that the community perish."

168:3.7 Although Jesus had received warning of the doings of the Sanhedrin on this dark Friday afternoon, he was not in the least perturbed and continued resting over the Sabbath with friends in Bethphage, a hamlet near Bethany. Early Sunday morning Jesus and the apostles assembled, by prearrangement, at the home of Lazarus, and taking leave of the Bethany family, they started on their journey back to the Pella encampment.