Home Jesus Illustrated Stories A Wedding And A Departure

A Wedding And A Departure 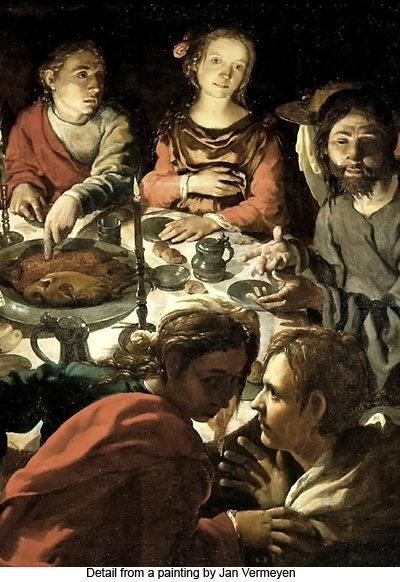 128:7.7 This year Jesus enjoyed more than usual leisure, and he devoted much time to training James in the management of the repair shop and Joseph in the direction of home affairs.Mary sensed that he was making ready to leave them. Leave them to go where? To do what? She had about given up the thought that Jesus was the Messiah. She could not understand him; she simply could not fathom her first-born son.

128:7.8 Jesus spent a great deal of time this year with the individual members of his family. He would take them for long and frequent strolls up the hill and through the countryside. Before harvest he took Jude to the farmer uncle south of Nazareth, but Jude did not remain long after the harvest. He ran away, and Simon later found him with the fishermen at the lake. When Simon brought him back home, Jesus talked things over with the runaway lad and, since he wanted to be a fisherman, went over to Magdala with him and put him in the care of a relative, a fisherman; and Jude worked fairly well and regularly from that time on until his marriage, and he continued as a fisherman after his marriage.

128:7.9 At last the day had come when all Jesus’ brothers had chosen, and were established in, their lifework. The stage was being set for Jesus’ departure from home.

128:7.10 In November a double wedding occurred. James and Esta, and Miriam and Jacob were married. It was truly a joyous occasion. Even Mary was once more happy except every now and then when she realized that Jesus was preparing to go away. She suffered under the burden of a great uncertainty: If Jesus would only sit down and talk it all over freely with her as he had done when he was a boy, but he was consistently uncommunicative; he was profoundly silent about the future.

128:7.11 James and his bride, Esta, moved into a neat little home on the west side of town, the gift of her father. While James continued his support of his mother’s home, his quota was cut in half because of his marriage, and Joseph was formally installed by Jesus as head of the family. Jude was now very faithfully sending his share of funds home each month. The weddings of James and Miriam had a very beneficial influence on Jude, and when he left for the fishing grounds, the day after the double wedding, he assured Joseph that he could depend on him “to do my full duty, and more if it is needed.” And he kept his promise.

128:7.12 Miriam lived next door to Mary in the home of Jacob, Jacob the elder having been laid to rest with his fathers. Martha took Miriam’s place in the home, and the new organization was working smoothly before the year ended.

128:7.13 The day after this double wedding Jesus held an important conference with James. He told James, confidentially, that he was preparing to leave home. He presented full title to the repair shop to James, formally and solemnly abdicated as head of Joseph’s house, and most touchingly established his brother James as “head and protector of my father’s house.” He drew up, and they both signed, a secret compact in which it was stipulated that, in return for the gift of the repair shop, James would henceforth assume full financial responsibility for the family, thus releasing Jesus from all further obligations in these matters. After the contract was signed, after the budget was so arranged that the actual expenses of the family would be met without any contribution from Jesus, Jesus said to James: “But, my son, I will continue to send you something each month until my hour shall have come, but what I send shall be used by you as the occasion demands. Apply my funds to the family necessities or pleasures as you see fit. Use them in case of sickness or apply them to meet the unexpected emergencies which may befall any individual member of the family.”

128:7.14 And thus did Jesus make ready to enter upon the second and home-detached phase of his adult life before the public entrance upon his Father’s business.