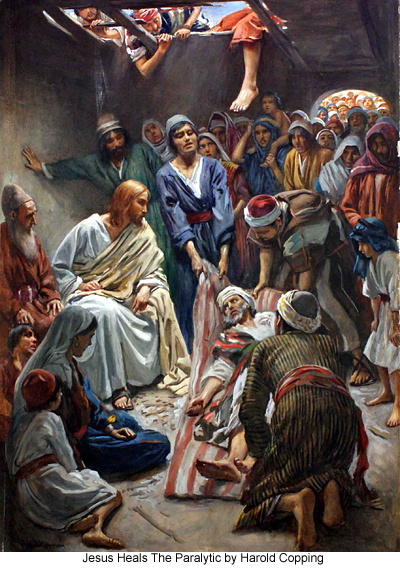 148:9.1 On Friday afternoon, October 1, when Jesus was holding his last meeting with the apostles, evangelists, and other leaders of the disbanding encampment, and with the six Pharisees from Jerusalem seated in the front row of this assembly in the spacious and enlarged front room of the Zebedee home, there occurred one of the strangest and most unique episodes of all Jesus' earth life. The Master was, at this time, speaking as he stood in this large room, which had been built to accommodate these gatherings during the rainy season. The house was entirely surrounded by a vast concourse of people who were straining their ears to catch some part of Jesus' discourse.

148:9.2 While the house was thus thronged with people and entirely surrounded by eager listeners, a man long afflicted with paralysis was carried down from Capernaum on a small couch by his friends. This paralytic had heard that Jesus was about to leave Bethsaida, and having talked with Aaron the stone mason, who had been so recently made whole, he resolved to be carried into Jesus' presence, where he could seek healing. His friends tried to gain entrance to Zebedee's house by both the front and back doors, but too many people were crowded together. But the paralytic refused to accept defeat; he directed his friends to procure ladders by which they ascended to the roof of the room in which Jesus was speaking, and after loosening the tiles, they boldly lowered the sick man on his couch by ropes until the afflicted one rested on the floor immediately in front of the Master. When Jesus saw what they had done, he ceased speaking, while those who were with him in the room marveled at the perseverance of the sick man and his friends. Said the paralytic: "Master, I would not disturb your teaching, but I am determined to be made whole. I am not like those who received healing and immediately forgot your teaching. I would be made whole that I might serve in the kingdom of heaven." Now, notwithstanding that this man's affliction had been brought upon him by his own misspent life, Jesus, seeing his faith, said to the paralytic: "Son, fear not; your sins are forgiven. Your faith shall save you."

148:9.3 When the Pharisees from Jerusalem, together with other scribes and lawyers who sat with them, heard this pronouncement by Jesus, they began to say to themselves: "How dare this man thus speak? Does he not understand that such words are blasphemy? Who can forgive sin but God?" Jesus, perceiving in his spirit that they thus reasoned within their own minds and among themselves, spoke to them, saying: "Why do you so reason in your hearts? Who are you that you sit in judgment over me? What is the difference whether I say to this paralytic, your sins are forgiven, or arise, take up your bed, and walk? But that you who witness all this may finally know that the Son of Man has authority and power on earth to forgive sins, I will say to this afflicted man, Arise, take up your bed, and go to your own house." And when Jesus had thus spoken, the paralytic arose, and as they made way for him, he walked out before them all. And those who saw these things were amazed. Peter dismissed the assemblage, while many prayed and glorified God, confessing that they had never before seen such strange happenings.