"Become As This Little One..." 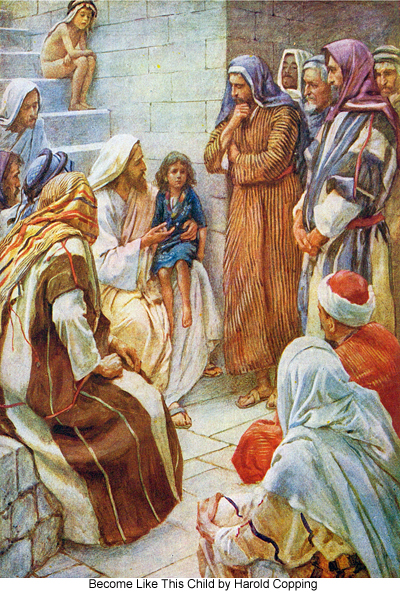 158:8.1 Entering Capernaum at twilight, they went by unfrequented thoroughfares directly to the home of Simon Peter for their evening meal. While David Zebedee made ready to take them across the lake, they lingered at Simon's house, and Jesus, looking up at Peter and the other apostles, asked: "As you walked along together this afternoon, what was it that you talked about so earnestly among yourselves?" The apostles held their peace because many of them had continued the discussion begun at Mount Hermon as to what positions they were to have in the coming kingdom; who should be the greatest, and so on. Jesus, knowing what it was that occupied their thoughts that day, beckoned to one of Peter's little ones and, setting the child down among them, said: "Verily, verily, I say to you, except you turn about and become more like this child, you will make little progress in the kingdom of heaven. Whosoever shall humble himself and become as this little one, the same shall become greatest in the kingdom of heaven. And whoso receives such a little one receives me. And they who receive me receive also Him who sent me. If you would be first in the kingdom, seek to minister these good truths to your brethren in the flesh. But whosoever causes one of these little ones to stumble, it would be better for him if a millstone were hanged about his neck and he were cast into the sea. If the things you do with your hands, or the things you see with your eyes give offense in the progress of the kingdom, sacrifice these cherished idols, for it is better to enter the kingdom minus many of the beloved things of life rather than to cling to these idols and find yourself shut out of the kingdom. But most of all, see that you despise not one of these little ones, for their angels do always behold the faces of the heavenly hosts."

158:8.2 When Jesus had finished speaking, they entered the boat and sailed across to Magadan.